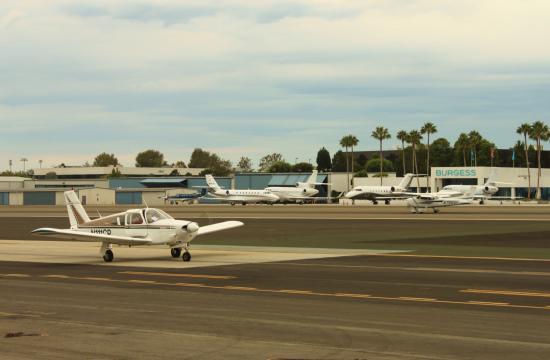 Landing at Santa Monica Airport (SMO) will be more expensive, as the City Council approved at a special meeting Tuesday night a resolution increasing the landing fee for all aircraft touching down at the airfield.

The votes were part of separate agenda items.

One Council member – Gleam Davis – made clear the votes made on landing fees and the sound mitigating pilot program to retrofit aircraft with mufflers did not establish a policy in favor or against the ultimate closing of SMO or potential future uses of the land should the City shut down the airstrip.

The rate would be applicable to all aircraft landing at SMO.

Some organizations that operate aircraft for charitable purposes, such as Angel Flight, may be exempt from paying the fee.

The landing fee would go into effect Aug. 1.

Practically speaking, the landing fees would range from $10 to $15 more per operation than what certain aircraft currently pay.

According to public testimony, the fee increase could result in hundred of additional dollars spent by student pilots, most of whom go through several operations – or landings and takeoffs – in an instruction session.

Accordingly, some opponents of the landing fee told the council since student pilots would have to pay more money for lessons as a result of the landing fee, the flight schools at SMO would eventually go out of business.

There were also several speakers who questioned City Hall’s case that SMO was, at best, a break-even venture and demanded an audit of Santa Monica’s books.

Other speakers predicted increased litigation and loss of business if the council approved the landing fees.

Another concern raised: since the imposition of the fee could threaten flight schools, pilots would have fewer options for safety training.

It was also argued that SMO has an economic impact of nearly $250 million within Santa Monica, an amount that could be jeopardized with the imposition of a landing fee.

Of course, there were many speakers who favored the landing fee increase, one of them being Los Angeles City Council member Bill Rosendahl.

“We got to work together. I support the closure,” Rosendahl told the Santa Monica council. “I think we have a strategy that can work. It’s the most dense urban environment in the nation. When we were bean fields and orange groves (90 years ago), it made sense. But today, it’s like taking a motorcycle and putting it in a playground. It doesn’t belong in such a tight, urban environment.”

One speaker who claimed he was one of Rosendahl’s constituents opined if the City were to get rid of SMO the area would experience more congestion and crime.

Planning Commissioner Richard McKinnon told the Council that the airport was not what it once used to be.

“It is now an industrial relic,” McKinnon said.

Meanwhile, Sunset Park resident John Fairweather told the council that SMO had “run up a debt of more than $30 million to the taxpayer.”

“Why are we subsidizing aviation for the few when the City has a budget crisis,” Fairweather rhetorically asked the council. “Approving staff’s landing fee is a no-brainer. Two-thirds of all aircraft using the airport currently pay no landing fees.”

Council members believed the landing fee increase would do more good than harm.

“It’s not our intention here to raise fees for the sake of raising fees,” Davis said. “What we’re trying to do is to create a level of balance here between the cost of operating the airport and the revenues that come in from the airport.”

Davis added the proposal to raise landing fees was not a subterfuge to ultimately lead to SMO’s closing, but instead was an attempt to bring “budgetary balance” to the Airport Fund.

“I don’t think this is an underhanded or end-around attempt to close the airport. Rather, it’s an attempt to address an issue that’s plagued us for some time,” Davis added.

Meanwhile, Council member Bob Holbrook said he did not believe in maintaining the status quo at SMO.

“I don’t think we can leave it as it is. I think we have to make changes,” Holbrook said. “We have to move forward with the future. I can’t imagine us adopting a policy or point of view that nothing should change.”

City staff stated in a report to council members that SMO was a financial burden for City Hall.

“While (a) study showed that the Airport contributes to the local economy, its impacts upon the City budget are negative. For many years, the City’s General Fund has subsidized Airport operations,” City staff stated. “But, demands upon the General Fund have increased. And, current fiscal realities, including the end of redevelopment, dictate that all City enterprises, including the Airport, must become self-supporting.”

City Hall claimed the Airport Fund had an outstanding loan obligation of $13.3 million.

The council also unanimously approved the development of a pilot program to retrofit “aircraft used in flight training with mufflers or other sound mitigation equipment.” The pilot program will cost City Hall $200,000; a budget item for this program would be included in the proposed city budget for fiscal years 2013 through 2015.

More than 100 people requested to speak at the April 30 special council meeting, which was dedicated exclusively to SMO.

Mayor Pro Tem Terry O’Day was not present at the April 30 special meeting.

The day before a massive fire that started at a Venice homeless encampment burned a Boardwalk building, Council member Bonin...