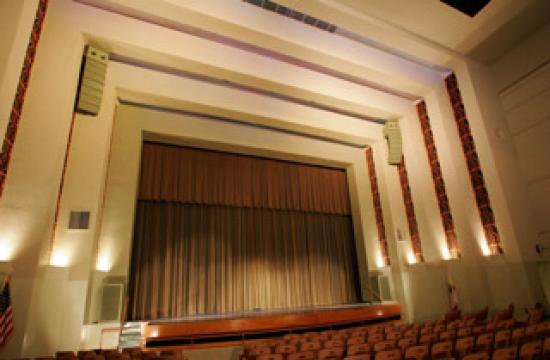 Featured on this Sunday’s tour of Santa Monica Conservancy Preservation Award winners is Barnum Hall, a unique blend of art and architecture from the glory days of the Works Progress Administration (WPA), the federally-funded program that provided funds for public buildings enriched with public art work.

Located at Santa Monica High School, it was built in the 1930s and was originally known as the Santa Monica Civic Auditorium where concerts, plays, musicals, opera and ballet were hosted.

The auditorium was renamed in 1944 in memory of the high school’s distinguished former principal, William F. Barnum, rumored to be a distant relative of the famous showman, Phineas T. Barnum.

World-renowned artist Stanton MacDonald-Wright created a mosaic artwork in the lobby as well as a unique art treasure found nowhere else — an asbestos theater curtain.

Emblazoned with one of MacDonald-Wright’s most innovative and creative designs, its preservation required dealing with a hazardous material.

Closed in the 1990s due to deterioration and earthquake damage, Barnum’s revitalization was credited to an unprecedented coalition of parents, faculty, community leaders, the school district and the city, aided by a Getty conservation grant.

Streamline Moderne architecture at its best and a wealth of decorative arts make a visit to Barnum Hall a highlight of Sunday’s tour.

While the tour begins at noon and ends at 5 pm, Barnum Hall is available to see only after 1:30 pm.

Other sites on the tour include a 1915 Ocean Park Craftsman home, a collection of Craftsman bungalows (Hollister Court) and the Pasqual Marquez Family Cemetery, one of the few remaining vestiges of the area’s Mexican heritage.

Tickets are $40 for the general public; $30 for members of the Santa Monica Conservancy and may be purchased through the Conservancy’s website at www.smconservancy.org.

A limited number of tickets will be available at check-in on Civic Center Drive on the south side of the Civic Center Parking Structure.