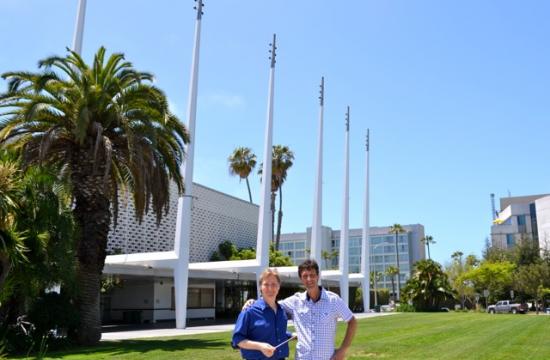 The Santa Monica Symphony, under the baton of Music Director Guido Lamell, will perform an exciting program consisting of some of Tchaikovsky’s greatest works this Saturday, May 25, at 7:30 pm.

It will take place at the Santa Monica Civic Auditorium, located at 1855 Main Street.

Admission to the performance is free.

This will be the Santa Monica Symphony’s final concert of their 2012-2013 season.  However, more significantly, this will be the final orchestral performance to be presented at the Civic Auditorium for the foreseeable future.

The Civic Auditorium is scheduled to close its doors indefinitely as of June of this year and there are as yet no plans in place to restore or rebuild.

“This is actually a great tragedy for our community,” Guido said.

“The Civic Auditorium has a rich history of service to our city and to Los Angeles. When you recall that the Academy Awards were presented here for many years, you realize that this auditorium was for some time considered to be the premier auditorium in the Los Angeles area. It has served our city’s public school performance festivals, showcased visiting orchestras, bands like the Rolling Stones, and headliner pop stars like Pink Floyd. It has been the true cultural center of our city. And no group will suffer this loss more than our Santa Monica Symphony as this has been our home for 55 years since our orchestra played the Gala opening concert of the Civic in June of 1958,” he said.

The May 25 concert is billed as a “Tchaikovsky Spectacular.”

The concert opens with a Suite of Movements from The Sleeping Beauty Ballet, which Tchaikovsky considered to be his “greatest” work. This is followed by The Variations on a Rococo Theme for cello and orchestra that will feature soloist, Antonio Lysy, Professor of cello at UCLA, international soloist, and Santa Monica resident.  After intermission the orchestra will perform the Fifth Symphony, which is considered to be Tchaikovsky’s most brilliant and powerful.

And, to close the concert and the Civic Auditorium in the grandest possible dimension, they will present the finale of the 1812 Overture in a “blaze of glory.”

“I selected the Sleeping Beauty Ballet Suite because of its parallels to the Civic Auditorium’s closing,” Lamell said.

“Of course you all remember the Sleeping Beauty story where Princess Aurora pricks her finger on the Evil Fairy’s cursed spindle and falls asleep for 100 years. Then she is awakened by a prince’s kiss who discovers her and her kingdom after they’d been forgotten for so long. Well, I see this closing similarly. Our Civic Auditorium will go to sleep for a period and will be reawakened as soon as possible. But it will take more than a kiss! And we certainly won’t wait 100 years! In fact, I, as Music Director of the Santa Monica Symphony, am committed to bringing people together to make this happen, as soon as possible. This, as I said, is our home and I will do whatever is in my power to help bring back the Civic Auditorium, or to build a new Performing Arts Center, in greater glory than ever,” said Lamell.

The Santa Monica Symphony invites residents to visit its website at www.smsymphony.org for further information about this concert or about the orchestra in general.