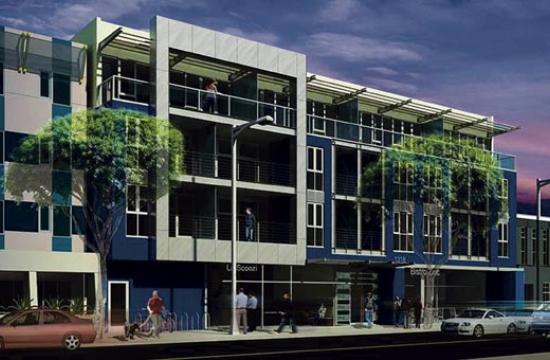 Though all seven Council members seemed pleased with the proposed DA overall, at least three of them wanted a little more time to negotiate community benefits with respect to affordable housing and solar panels.

One of those three who voted against the DA – Council member Kevin McKeown – was concerned of a few proposals the developer submitted to the dais after the staff report was made public. McKeown hoped the public would be afforded more time to review some of the project alterations.

Located at 1318 Second Street, the DA proposes a four-story structure with 53 units, including 28 studios, 19 one-bedrooms, and six two-bedrooms. The building would be 45 feet high and 15,000 square feet. Ground floor commercial space would take up 6,664 square feet. There would also be a two-level subterranean parking garage with 66 parking spaces.

Among the community benefits proposed:

• $125,493 towards transportation infrastructure improvements in the Downtown area;

• $125,000 towards the Colorado Esplanade improvements;

• $25,000 towards Big Blue Bus infrastructure improvements in the Downtown;

• $25,000 towards Historic Preservation programs for the Downtown;

• Ground floor setback that widens the adjacent sidewalk; and,

• A local hiring provision during construction and for commercial employees.

Two community benefits were proposed literally minutes before the matter was heard by the council – the timing of which led to a proposal that the matter be heard at a later date to give the proposals greater consideration.

The developer told the council they were willing to increase the number of affordable units from eight to 10.

Council members raised several concerns during the discussion, including whether developer pays in-lieu parking or transportation impact fees, the lack of private open space in six units, and affordable housing.

With respect to affordable housing, some Council members were concerned about the lack of two-bedroom affordable units.

Council member Tony Vazquez was concerned about the unit mix. He hoped the proposed development featured more affordable housing units for families instead of studios or one-bedrooms that usually caters to students, singles, working professionals, or very small families.

According to the developer, unit sizes averaged 478 square feet for studios, 694 square feet for one-bedroom units, and 1,104 square feet for two-bedrooms. He added the units are between 30 to 50 percent larger than other units of other downtown area projects recently proposed.

Mayor Pro Tem Terry O’Day was happy with the community benefits offered by the developer, including the two amendments relayed to the dais shortly before council members heard the matter.

Council member Gleam Davis, who believed the proposed development was “a good project,” supported requiring the project to incorporate traffic-reducing measures, such as a high average vehicle ridership (AVR) figure.

Indeed, the developer agreed to a 2.0 AVR, up from the previously proposed 1.75.

Davis was happy to see 20 percent of the project dedicated to affordable housing, but, like Vazquez, she said she would liked to see a greater mix of two-bedroom units available to prospective affordable housing tenants.

“Although it’s a small project, I want to make it a very good project.” Council member Kevin McKeown said, adding he aimed for greater housing stability both within the project and throughout the downtown.

“In the big picture, this project isn’t going to change the nature of the City, but it is a residential project in our new downtown neighborhood. Downtown has shifted very significantly into being a place where quite a few people do live. It’s a wonderful, vibrant neighborhood where people are within walking distance of all the best Santa Monica has to offer,” McKeown continued, agreeing with Davis and Vazquez on seeing more two-bedroom affordable units.

Conversely, Council member Bob Holbrook said he thought the units were properly sized and wondered how many families would actually live in downtown.

Vazquez was open to having some more time to consider the DA in hopes to squeezing one to two additional two-bedroom affordable housing units.

Council member Ted Winterer wanted to see less of the negotiations process take place on the dais and proposed a substitute motion to continue the matter. Though Winterer was pleased with the project overall, he suggested the council spend a little more time fine tuning a few issues and trade-offs. That motion failed 4-3, with only McKeown and Vazquez supporting Winterer’s suggestion.

The full council voted on the DA; Mayor Pam O’Connor and Council member Bob Holbrook excused themselves from the council meeting later in the evening.