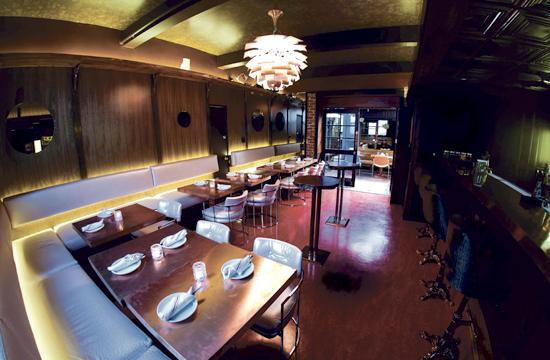 When Jerry Baker opened his new modern Mexican restaurant Tinga in the space previously occupied by Renee’s Courtyard Café at 522 Wilshire Boulevard last month, he found most of his customers didn’t come in until after 11 pm.

A month later, locals are catching on that the location is no longer a dive bar like it has been the past 30 years.

Instead, a new atmosphere awaits where the design and décor celebrates the culture and heritage of Mexican cuisine.

The restaurant launched its Happy Hour on Monday, which will run seven days a week from 3 pm to 6 pm, which includes $7 margaritas, $7 red/white wine, $5 selected draft beer, and discounted food.

“Renee’s was mostly a bar set up, much darker, and it definitely kept a dive bar status with incredible character having all these rooms,” Baker said. “When we ran Renee’s for a month in March before the launch of Tinga, we had no business until 10:30 pm or 11 pm and then we would do a lot of business from 11 pm to 2 am when people wanted to come in for a drink.”

Baker said this customer flow had shifted with people arriving earlier in the evening after learning that Tinga was more food orientated.

Baker’s menu is imaginative with the likes of the Tacos Al Pastor de Jerry with guajillo-rubbed and pineapple-marinated pork with a Caribbean kick and grilled pineapple lime salsa and scotch bonnet peppers. Another popular dish is the Agua Chiles with prawns, cucumber, tomatoes, mint, lime, and chiles.

Baker said his food has up front, powerful flavors.

“That is the way I like to cook,” he said. “The inspiration really came from my childhood of loving Mexican food and really liking hot things. When my buddy went to Santa Barbara, I went up and had food at La Super-Rica Taqueria and that sort of changed my idea of what Mexican food can be.”

Not all of Baker’s dishes are traditional Mexican dishes – just take the Pastram-adilla.

“The Pastram-adilla came from a drunken night of raiding the refrigerator and I had tortillas, cheese, and pastrami,” he said. “I put that together and thought ‘wow, that’s good.’ I added some chayote to give it a nice flavor and sort of south of the border twist.”

Mixologist Joel Black with Black Lab Ventures, is the man behind the drinks, having previously managed the bar programs at Comme Ca, Cana Rum Bar, and The Doheny.

Baker said brunch, lunch, and delivery would be available this summer.

For reservations or more information, call 310.451.9341 or visit www.tingabuena.com.