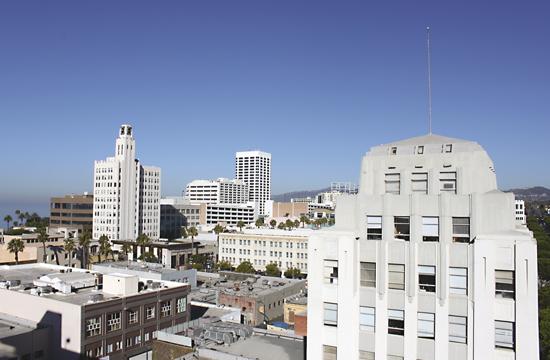 Santa Monica may have a skyline spotted with a few more high-rises, though some residents would like to have a say in whether the City’s skyline is altered in the first place. More than 300 people – at least 325 people had formally signed-in – filled a community room at the Civic Auditorium on Monday evening to give their two cents about the Downtown Specific Plan.

There were proposals, though, which included new density requirements and permitting procedures for developers who seek to exceed certain height restrictions.

Interestingly enough, there were eight “opportunity sites” where the rules and regulations of the Downtown Specific Plan would not apply.

At the heart of the town hall-style meeting coordinated by City Hall and the Planning Commission was whether or not height restrictions should be eased for developers who want to build projects near the Santa Monica coastline, including plans for a high-rise building designed by Frank Gehry and another skyscraper at the Fairmont Miramar.

There were some attendees at the meeting who were vehemently opposed to the Downtown Specific Plan allowing for additional growth and density within Santa Monica’s urban core. Others seemed willing to have height restrictions eased if developers made concessions for affordable housing.

So what is in a plan?

During Stefan’s presentation to the standing-room only crowd, a few statistics were highlighted. For example, City Hall may require developers to obtain a permit to build a structure between 32 and 39 feet. For projects higher than 40 feet, developers would have to make additional concessions. The upper limit of height restrictions: 84 feet. However, some projects may exceed that height.

The plan also proposes to manipulate density so as to make certain developments not look as large or tall.

According to a City staff presentation to the Planning Commission in March, the intent of the Downtown Specific Plan is to limit growth opportunities to the “approximately four percent of the City located closest to transit.”

The plan hopes to maximize growth and user experience in Santa Monica’s downtown core without, ideally, bringing in new traffic.

Walkability is the heart of the success of the Downtown Specific Plan and any activity taking place within the downtown core, according to City staff.

City staff stated both to the Planning Commission and to those attending the May 6 town hall meeting that the Downtown Specific Plan is guided by the Land Use and Circulation Element (LUCE).

It was also mentioned by City staff that the key goals of the plan would focus on investment, reduce new vehicle trips (as per the LUCE), support economic health, maximize livability and sustainability, and connect downtown to the Civic Center and the beaches.

City staff said it hopes the plan will preserve character of historic buildings and the character of surrounding streets and spaces while also enhancing walking, driving, biking, and transit circulation.

After Stefan’s staff report, community members came up to the microphone one by one to express their respective opinions and perspectives of the Downtown Specific Plan.

Some residents seemed to be supportive of some of the prospective growth and development that could be spawned by the plan. Still others believed the plan would open the door to high-end developments that would not only reach for the sky but also dramatically increase traffic in the downtown core.

Some residents who were worried about the direction the Downtown Specific Plan was heading pointed to one proposed project as the poster child of what they do not want to see in Santa Monica’s urban core – Santa Monica resident and architect Frank Gehry’s proposed designs for a 22-story hotel to be built on the corner of Santa Monica Boulevard and Ocean Avenue.

Another cause for concern for those residents who believed Santa Monica’s identity would be dramatically altered for the worse: the arrival of high-rise developments at eight “opportunity sites.”

“The LUCE identified specific sites near transit in the downtown that could accommodate mixed use development and provide significant benefits,” City staff told planning commissioners in March. “Each site would be expected to meet the overarching circulation standards and guidelines such as, but not limited to, contributing to the public realm, pedestrian orientation, walkability and multimodal circulation. In addition, these sites would be expected to provide significant site specific community benefits.”

There were many longtime residents who voiced their respective opposition to the potential developments of opportunity sites, worrying these dense projects that would exceed height restrictions would dramatically change the personality of Santa Monica. These residents hoped city planners would limit developments to between two and four stories in order to preserve Santa Monica’s not-so-urban character and ocean views.

Countering the status quo were some residents who were not too concerned with traffic and hoped developers would provide more affordable housing in exchange for building taller buildings.

Check out next week’s edition of The Mirror for more perspectives from Monday’s town hall meeting.