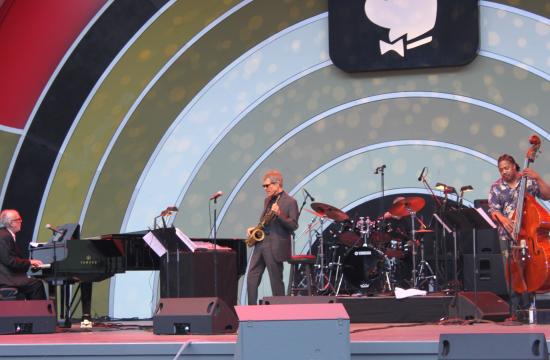 The 2013 Playboy Jazz Festival returned to the Hollywood Bowl for a successful Father’s Day weekend – June 15 and 16 – with an incredible line-up and George Lopez as new Master of Ceremonies.

The festival kicked off 3 pm Saturday with The Los Angeles County High School for the Arts Jazz Ensemble.

The Sunday program began at 3 pm with the LAUSD Beyond The Bell Jazz Band kicking off the festivities.

Following their performance, keyboardist-composer-arranger Bob James and alto saxophonist David Sanborn spoke to the press about reuniting after more than two decades.

Their new collaborative effort “Quartette Humaine” was released May 21.

Sanborn said the pair asked themselves all the time why it took so long for them to collaborate again.

“I don’t have a credible good answer for that, except that lives of musicians are very complicated and before you know it, 25 years go by, and here you are,” Sanborn said.

“During that time, we went in so many different directions separately, so that when we got back together, we really had to reunite in a total way, talk about what music we like, what music we don’t like, and we’re still bonding and learning about what it means to have had the opportunity to collaborate again after such a long time. It’s amazing to me.”

Sanborn said they were excited to tour again.

“We didn’t follow up ‘Double Edition’ with a live tour, we never really had a chance to kind of really play that music through to explore and deconstruct it,” he said. “A lot of times what happens when you play music live that you’ve recorded, it changes and morphs into something completely different. Now we’re playing music from the new album ‘Quartette Humaine’ and ‘Double Vision,’ so we’re playing that music for the first time ever live.”

James joked the paired needed such a long time apart so they could come back strong.

“We regret the fact it took us so long,” James said. “At least we did it and now we can say we have two projects and we are not going to wait 26 more years before we do the third album.”

James said he loved performing at the Hollywood Bowl.

“When we realized we were going to be doing this tour together, we had so many opportunities to perform, even tonight, at a venue that is unique on the planet,” he said. “There’s nothing like the Hollywood Bowl to play this music.”