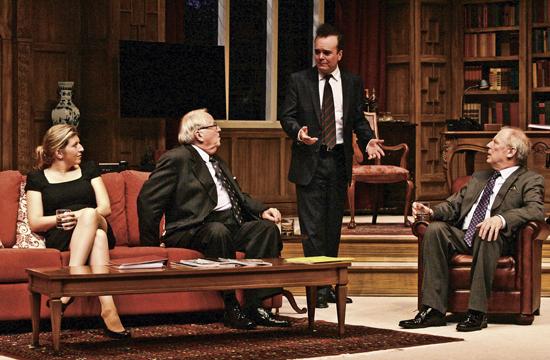 Oh those Brits! Who can poke hilarious holes into the absurdity of global politics better than Antony Jay and Jonathan Lynn, the writing team who for years, tickled audiences with their long-running BBC series “Yes Minister” and “Yes, Prime Minister,” which unmercifully skewed the British political system. Well hip, hip hooray!

Following its successful run in London’s West End, “Yes, Prime Minister” has sailed across the ocean and has docked at the Geffen Playhouse where the play is making its American premiere.

Under the razor sharp direction of Jonathan Lynn, this whacky story begins at Chequers in the study of the country home of Prime Minister Jim Hacker, played with just the right amount of innocence, ineptitude, and cunning by Michael McKean.

Two of his top advisers are Cabinet Secretary Sir Humphrey Appleby, meticulously played by Dakin Matthews, who is a master of the slow take with loud subtext, and the most prissy, Cassandra-like prophet of doom Bernard Woolley, Principal Private Secretary to the Prime Minister, played with multiple degrees of subtle hilarity by Jefferson Mays, perhaps the only member of the Cabinet with even the slightest touch of morality.

Sitting in the gorgeously designed study by Simon Higlett, replete with portraits of Winston Churchill and Queen Elizabeth, Sir Humphrey and Woolley swap disparaging remarks about their leader with Sir Humphrey quipping, “It’s the only job that doesn’t require any experience,” and in referring to reports given to Hacker, “He never reads beyond Page 3.”

Before we even meet the Prime Minister, it’s clear that he’s an incompetent boob, almost incapable of original thought or action.

In between shredding his competency, they also discuss some logistics for the impending European Conference.

As the plot unfolds, it revolves around the sagging European financial system, which is on the verge of collapse. But wait! There is a huge financial bonanza being offered by the oil rich cockamamie country of Kumranistan, who in exchange for building a rather convoluted pipeline, which ridiculously zigs and zags all over the map of Europe, will give a ten-trillion dollar loan to the EU which is to be collateralized against future oil purchases.

A discussion ensues and in response to a remark about the Greeks, Woolley laments, “I fear the Greeks, especially when they bring gifts,” reminding his colleagues of the Trojan Horse to which the Prime Minister responds, “The Greeks can’t afford gifts.”

Hacker is dead set against joining the EU, which seems to be a condition of getting the loan.

At one point, totally flabbergasted, he turns to Sir Humphrey and says, “Do you know what else I don’t know?”

By now, Claire Sutton, Special Policy Advisor to the Prime Minister, beautifully brought to life by Tara Summers, joins the rest of the cabinet and like a pro in a tennis match, fields every crisis with a volley of canned responses.

Devoid of much of a moral compass, Sutton is the queen of hilarious mercurial verbal transitions, giving answers to questions that best serve that particular moment, whether fact or fiction.

After much cajoling and trickery, the Prime Minister agrees to the conditions of this much-needed loan.

But wait, another fly is soon to hit the ointment as the Kumranistani Ambassador, well played by Brian George, enters the already insane proceedings and says that as a condition of the deal, his Foreign Minister must be provided with three prostitutes for his sexual pleasure.

A big discussion ensues as to the morality of the Ambassador’s request and how it would impact the people if they were to find out. Options are discussed. Should we call it “Horizontal Diplomacy” or a “Eurojob?” Should we fly them in the Royal Helicopter?  Should we deport them afterwards as illegal aliens or should we have then assassinated so they can’t spill the beans? “Is it better for three people to get screwed than the whole country?” And so it goes throughout most of Act II with the Hacker uttering such delicious, contradictory lines as “I am their leader. I must follow them.”

He is mostly in a state of confusion and ineptitude with Sir Humphrey reminding him that “There are so many things you don’t know about, what’s one more.”

The devious Sir Humphrey comes up with the idea of a “red herring” saying “It’s much easier to solve an imagined problem than a real one.”

In case you haven’t figured it out yet, this entire play is one big farce, but not the typical French farce with people dashing in and out of bedroom doors.

“Yes, Prime Minister” could best be described as political satire at its best, especially with some of Sir Humphrey’s long, almost Shakespeare-like monologues, which in this case are pure, but eloquently delivered double-speak, quite appropriate considering the state of our own politics.

And so, dear readers, if you are dying to know if “all’s well that ends well,” I suggest you hie thee to the Geffen Playhouse posthaste where you will leave laughing all the way to  your car.