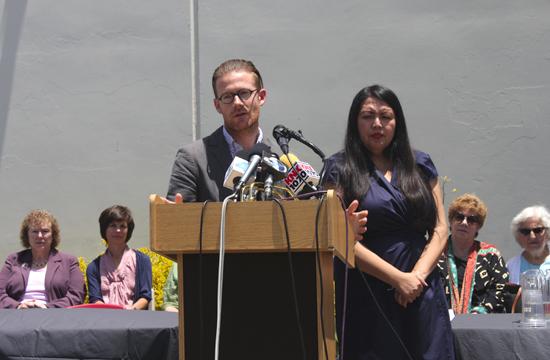 A private donation of $50,000 will help start a Youth & Family Violence Prevention Fund in Santa Monica in response to the City’s three shootings in five days, officials from the City, school district, and SMC announced Tuesday.

The funds will go to Santa Monica’s Cradle to Career group who will take the lead through an inter-agency collaboration to address youth and family violence.

SMMUSD Superintendent Sandra Lyon said the school district was committed to a collective impact approach to help youth and their families.

“As we all recover from these events and incidents, one of the things we try and do at first is ask why did this happen,” Lyon said. “Then in the next days and weeks we try to figure out how we can make sure something like this doesn’t happen again.”

Lyon said issues such as domestic violence and mental illness were not isolated to Santa Monica, adding “as a school system, we cannot address those issues by ourselves.”

“As superintendent, we do what we can within our school in order to make sure that our students and our families are properly cared for,” she said. “What we’re talking about is a societal issue, it’s a community issue, and it’s an issue that’s going to take a collective approach in order for us to support students in need and families in need.”

Irma Carranza, of the Cradle to Career Group, reiterated the importance of a collective approach.

“We came together as a community about two and a half years ago when we had the death of Richard Juarez here at Virginia Avenue Park and the suicide of Matthew Mezza following soon after that,” Carranza said. “We had to come together as a community and almost do a reflection and evaluation of what we’re missing in our community. Clearly what the community wanted and asked for was for everybody, all the different partners in Santa Monica, to come together and take this on with what’s happening with our young folks in the community.”

“Over the last year and a half we’ve been gathering all the different data from different institutions and different resources to take a look and see what the data is telling us,” Carranza said. “We have testimonies from parents and youth and what they’re feeling. We also wanted to go ahead and have data and tell us where the gaps are, where we may be falling short.”

Carranza said the Cradle to Career group was currently focused on addressing areas of concern within its partnership.

“What the data tells us, as a city, we’re actually doing a really good job in many areas, but we’re falling short in some areas,” Carranza said. “One of those areas is older youth (under the age of 24). Another thing that is happening is a lot of kids are kind of self-medicating through alcohol use, or other forms, and the data is confirming there is something going on in older youth, but there’s also something going on as early as entering kindergarten. The collective work is about addressing all those gaps and where we’re falling short.”

Jonathan Mooney, consultant and facilitator of Cradle to Career, said it and its partners were looking to solve an entrenched problem.

“The events of the last week are a reminder of the tragic plague of gun violence, not just in California, but in this country,” Mooney said. “They are a reminder of the critical and urgent need for mental health services and to take that seriously as a community, as a country. They’re a reminder of the critical need to work with young folks 18 and older, and how we don’t have a system to work with young folks in that age demographic. It’s also a reminder that social problems don’t just have one route, or one solution. They are multi-faceted. Subsequently it’s not one entity or one organization that can solve those problems. What we’ve learned over the last week is that individual institutions and entities did whatever they could to mitigate and prevent a tragic loss of life.”

For more information on Santa Monica’s Cradle to Career initiatives or to make a donation to the Youth & Family Violence Prevention Fund, visit www.santamonicayouth.net.