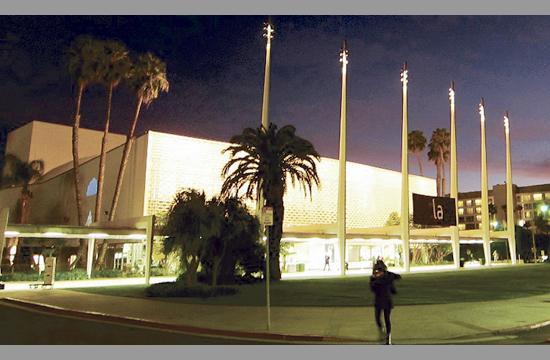 Next week begins council members preparing to grapple with the Biennial Budget. By the time the week comes to an end, the Santa Monica Civic Auditorium will close up shop and remain dark for the immediate future.

It may take at least five years and $50 million to re-open the Civic Auditorium, coincidentally closing its doors only five days after council members will likely approve the two-year financial document that relegated the City’s iconic cultural venue into its current state of closure.

Two weeks ago, community members and the council discussed options of how to save the Civic Auditorium.

Though the Civic Auditorium would remain dark for at least five years as of June 30, Cultural Affairs manager Jessica Cusick said the venue could be used in other forms as the community figures out a way to raise the funds necessary in order re-open it as a top-flight destination.

Cusick suggested the Civic Auditorium could be used for meeting space or as a filming location.

Any other use of the cultural venue during its closure would not be feasible, according to the City staff report, which states City Hall cannot operate the Civic Auditorium in its current state due to antiquated performance technology, seismic safety concerns, a business model that is no longer economically viable, and its inability to maintain any sort of competitive advantage.

Even more, City Hall has operated the Civic Auditorium with an annual budget of up to $2 million, a figure that could not be maintained in the 2013-15 Biennial Budget.

Interestingly enough, closing down the Civic Auditorium would not translate into City Hall spending zero dollars on the venue. According to Cusick, City Hall would still have to pay $250,000 annually for basic maintenance of the ground surrounding the venue, insurance, and staffing costs for any interim uses of the Civic Auditorium.

Cusick added her department requested $525,000 for the 2013-14 fiscal year for the Civic Auditorium.

Looking ahead, Cusick pointed out there were a few options City Hall and Santa Monica residents could pursue to raise the funds necessary to re-open the Civic Auditorium as a leading and world-class venue, including a voter-approved general obligation bond, private funding, naming rights, foreign investment, development of the Civic’s parking lot, and a fundraising campaign.

The City may also seek to make seismic and accessibility upgrades for half the cost in the short term and seek other renovations, such as a new sound system and updated restrooms, later, as if to spread the cost of rebuilding the facility.

If only the seismic and accessibility upgrades were pursued – at an estimated cost of $23 million – Council member Tony Vazquez pondered whether a benefit concert could be held at the Civic Auditorium to help raise money for the venue.

One point raised: if the City sought to develop the area surrounding the venue as a means to fund it, how much open space adjacent to the Civic Auditorium would be sacrificed and would the Civic Center Specific Plan (CCSP) have to be amended?

Guido Lamell, conductor of the Santa Monica Symphony, pointed out the Civic Auditorium was originally built as a multi-use venue and the City should aim to rebuild the venue as a concert hall specifically dedicated to hosting the world’s greatest symphonies.

Many who spoke during the public comment period supported the idea of concerts being held at the Civic Auditorium, though one speaker suggested the venue also needed to host banquets, conferences, and special events to become economically viable.

Another speaker cautioned City Hall from spending too much money on experts and consultants.

Also suggested: assessing a ticket surcharge in the vein of the Hollywood Bowl; establishing of an advisory panel; develop of an arts and cultural district with the Civic Auditorium as a hub; and, create a public authority comprised of independent experts to revitalize the venue.

On the dais, it was suggested the City find more ways to focus on the arts during the interim use of the Civic Auditorium.

With the closure of the Civic Auditorium at the end of this month, City Hall will begin the community process to continue a dialog of how to save the venue – including the creation of an advisory group.