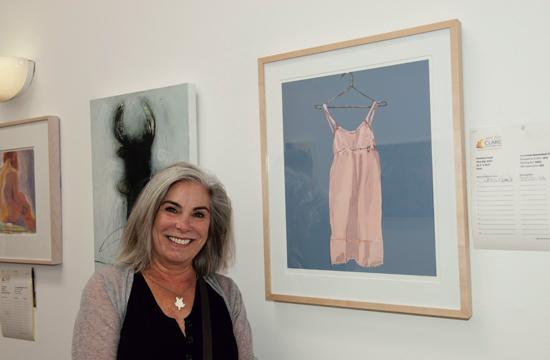 The CLARE Foundation held its seventh annual ART for CLARE fundraiser on Sunday at Bergamot Station.

The fundraiser, which grossed more than $50,000, holds a particular significance for executive Director Nicholas Vrataric.

“The money goes to support our 10 programs,” Vrataric said. “As government funding is going and as we transition into the Affordable Care Act, we are seeing people with the least resources being marginalized, as this new healthcare reform act is not likely to include these people, especially when it comes to substance abuse disorders.”

As part of its mission to serve the community, CLARE has become one of the most successful treatment providers on the Westside.

It provides compassionate and affordable residential and outpatient treatment programs for men and women, as well as a youth prevention program.

This year’s ART for CLARE fundraiser offered patrons the opportunity to bid on pieces of art from more than 70 well-known and emerging artists, as well as silent auction items that included a visit to the set of the television show “True Blood.”

Event co-chair Meredith Baxter auctioned off pieces of her art to benefit the CLARE Foundation as well.

“CLARE works,” Baxter said. “Their treatment is effective, compassionate, and affordable, and they do save lives through recovery.”

In addition to the auction items, the event attracted the support of restaurants such as El Cholo, Kate Mantilini, Lemonade, and Café Montana. These restaurants offered attendees the chance to sample their food.

Vrataric said the idea for the art fundraiser was not a surefire success as there were other big events happening across the city at the same time on Sunday.

However, he said the event was a doubtless hit, as it attracted more than 300 attendees.

Vrataric believes the CLARE Foundation has found its very own niche in the art fundraising world.

“This event is looking like our most successful event and support continues to grow,” he said. “We did better than ever this year. The word is getting out and the community is buying into the event. While this event isn’t focused on kids, it’s welcoming and families are getting into it.”

“I think this year’s show is the strongest we’ve had yet,” Caughey said.

For the first time the event’s history, the CLARE Foundation will display unsold art pieces at haleARTS Space at 2443 Main Street in Santa Monica through Saturday, June 8.

The exhibition will offer CLARE supporters and art collectors the chance to purchase pieces at reduced rates.

For more information about the CLARE Foundation and the chance to buy unsold pieces from the fundraiser, visit clarefoundation.org and halearts.com.