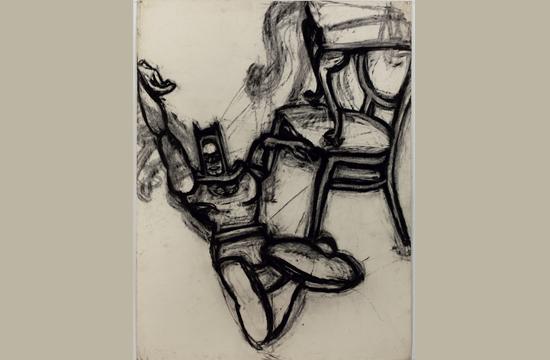 It’s an exciting time at the Santa Monica Museum of Art as it welcomes visitors to view its three new summer exhibits that opened June 1.

In the Main Gallery, visitors can experience Joyce Pensato’s “I Killed Kenny” exhibit through Aug. 17, which is the artist’s first museum survey and her first exhibition in Los Angeles.

These new, site-specific works are contextualized by a selection of charcoal drawings and key paintings made between 1990 and the present.

Appropriating iconic American cartoon characters as her point of departure, Pensato’s gestural paintings and drawings flicker in the liminal space between menacing abstraction and comedic representation: Batman is depicted as a hollow, deliquescent mask, Bart Simpson peers through abraded skin, and Felix the Cat is rendered as a decapitated head.

Pensato’s paintings reinvigorate the legacy of Abstract Expressionism, imbuing her taxonomy of characters – The Simpsons, South Park, Donald and Daisy Duck, Olive Oil, and Mickey Mouse – with an uninhibited and arresting presence.

Through her dynamic application of paint and pop cultural references, Pensato’s compositions boldly extend the possibilities of action painting.

“I Killed Kenny” also debuts a series of paint-splattered collages, in which historic images of Abraham Lincoln are overlaid with portraits of iconic Hollywood celebrities, contemporary artists, and legendary American boxers – Robert DeNiro in “Raging Bull,” Gena Rowlands in “Gloria,” Christopher Wool in his studio, and publicity stills of Muhammad Ali.

In these works, Pensato’s signature splatters of industrial paint exploit the material’s visceral physicality, careening America’s fraught social and political past into the forefront of our contemporary consciousness.

SMMoA’s executive director Elsa Longhauser said the museum prides itself on presenting work by artists who have made a singular contribution to the art historical canon.

“Joyce Pensato has devoted herself to creating a lifework that is fearlessly executed and radically innovative; she is an important touchstone for artists of all ages,” Longhauser said.

A full-color catalog will be published for the exhibition’s closing with an essay by Jeffrey Uslip and an interview with the artist by Hammer Museum Curator Ali Subotnik.

In Project Room 1, “Park Studio: Skaters and Makers” will run through July 13.

The project fused art, education, and skateboarding – a culture that has deeply shaped the Venice and Santa Monica area, well known as the birthplace of modern skateboarding during the 1970s.

Meanwhile, in Project Room 2, Marco Rios’ “Anatomy of an Absent Artist” will be on show through Aug. 17.

The exhibition is inspired by three mid-century cinematic portrayals of “artists” who lead double lives – their public artistic personas at odds with their secret identities.

With his signature theatricality and penchant for noir, Rios has produced three artworks in three different media: film, sculpture, and photography.

In this exhibition, Rios enacts the narratives from Roger Corman’s film “A Bucket of Blood” (1959), John Frankenheimer’s film “Seconds” (1966), and Perry Mason’s TV episode “The Case of the Absent Artist” (1962), reinterpreting the fictional “masterpieces” that propel these three stories.

In Frankenheimer’s “Seconds,” the title character fakes his own death, and, through elaborate reconstructive surgery, assumes a new identity as an artist living in Malibu. Casting himself as the title character, Rios employs devices such as prostheses to allegorize the physical and conceptual process of transformation.

Perry Mason’s “The Case of the Absent Artist” centers on a successful comic strip artist who intends to abandon his commercial life and relocate to Majorca to concentrate on his “real” art, but is brutally murdered the night before his departure. Rios recreates the main character’s painting titled, “A Day’s Catch” as a photographic self-portrait on the shores of Majorca.

Finally, the protagonist in Roger Corman’s “A Bucket of Blood,” attempting to create his first celebrated “masterpiece,” accidentally stabs his landlady’s cat. He conceals the carcass in plaster, creating a Hans Arp-like, entombed white modernist form.

Rios reimagines the sculpture as a macabre, yet modernist, taxidermy, pierced by a large knife and rendered in sleek silver electroplate.

Using these three fictional narratives as source material, Rios re-imagines each of the main character’s aesthetic creations and collapses the cinematic, the artistic and the biographical in fiction and reality.

The Museum is open Tuesday through Saturday from 11 am to 6 pm, closed Sunday, Monday, and all legal holidays.

The suggested donation at the door is $5; $3 for seniors and students.