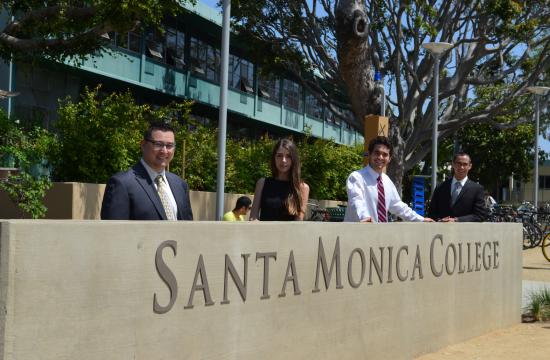 Four outstanding Santa Monica College students have been selected for the prestigious Dale Ride Internship program and will serve this summer in Congress and with various organizations in Washington, D.C.

The interns, who come from a wide variety of backgrounds and interests, will gain valuable experience through the eight-week summer internship program, believed to be unique for a community college.

Each intern receives funding to cover housing, transportation and $2,000 in spending money.

Annual funding for the SMC students is provided by The Dale Ride Family Fund, the SMC Foundation President’s Circle, and the SMC Associates, a private organization that funds speakers and special programs at the college.

The program, which is celebrating its 22nd anniversary, has sent 123 students (excluding this year’s group) to the White House, Congress, and other agencies.

The internship program was established in 1991 in the memory of a man who had a long and distinguished career as an educator, administrator and public servant.

Ride taught political science and served in administrative posts at SMC for 33 years until his death in September 1989 at the age of 67.

Robert Contreras, who has been placed in the office of Rep. Ann Kirkpatrick of Arizona.

Veteran, husband, and father — these form the core of Robert Contreras.

From an early age “service” has been a way of life for him, from volunteering in his community’s public works projects to his school and church.

He would later spend over a decade in the U.S. Navy as a decorated petty officer first class. Even though his tour is over, service has not ended for Robert.

As a Fellow in The Mission Continues, an organization that encourages veterans to continue a life of service after the military, he is assisting veterans’ integration into the academic environment through establishing peer mentoring, tutoring and academic success workshops.

When not on campus helping his fellow vets, he is a Leadership Fellow with the Iraq and Afghanistan Veterans of America (IAVA). With them, they lobby for veteran’s rights to members of Congress.

Linda Sinclair, Faculty Leader for the Veteran’s Resource Center, writes, “Rob is resourceful, a team leader and team builder, and has a way of working with people from all walks of life that is respectful and caring and makes those people believe in themselves.”

From college campus to beyond national borders, Robert described his time in the military, “I spent nearly a decade serving not just my country but the entire global community.”

He is transferring to UCLA this fall.

Madisson Goorman, who will serve her internship with the Society for Women’s Health Research.

Not held back by her high school status, Madisson Goorman became the youngest intern in the 2010 Meg Whitman for California Governor campaign’s San Fernando Valley headquarters.

Inspired by a strong female candidate, she again became the first high school intern at the Ronald Reagan Foundation.

Given projects usually managed by college students, Madisson planned events for speakers such as Dennis Miller and the 2011 Republican Primary Debates. She even helped to write and produce material for the events and social media.

Taking a page from the political field of strong women role models, she obtained the highest honor — the Gavel — in the Crisis level of competition in the Model United Nations.

With a goal of attending law school, she plans to pursue legislative work pertaining to women, economic policy and international issues.

It is no surprise that she has her eyes set on addressing women’s health policy and pay disparities.

Currently, Madisson pursues her interests in public policy by interning at the Raben Group where she works with organizations such as Casa de Esperanza, The Williams Institute of UCLA Law School, and the Mexican American Legal Defense & Educational Fund (MALDEF).

Through her experience working at a law firm in Santa Monica, Madisson has a head start on her goal of completing law school.

With a political and legal résumé already well defined, her path to Washington has a solid foundation from which she is well positioned to jump.

She is transferring to UCLA this fall.

Parker Jean, who will serve with the U.S. National Committee of the International Council on Monuments and Sites.

What are the qualities that define a leader? Is it the clichéd Eagle Scout who wants to save the world? Clichés often emerge from long tested truths, and when describing Parker Jean, the current Associated Students President, apparently he’s leading the way.

Dean of Student Life Deyna Hearn writes, “he stands among the most dedicated, responsible, reliable, and trustworthy student leaders. Parker is highly respected by his peers as well as the entire Student Life staff.”

Not only a leading representative of Santa Monica College, he also works as a Hospitality Ambassador for the City of Santa Monica. As if this was not enough, he has been involved with the Scholars Honors’ Program, Eco-Action Club, Club Grow and the California Student Sustainability Coalition.

However, Santa Monica is not the only city receiving Parker’s goodwill.

The Orange County Spirit League, for children ages 6-20 with special needs who are physically active (ambulatory), is another non-profit where Parker volunteers.

Known as a team player who is able to interface effectively with different constituencies, Washington D.C. had better prepare itself for an up-and-coming player. He has been accepted at American University in Washington, D.C.

Scott Pine, who will be at the American Psychological Association.

More than 70 years ago the United States faced a dark time in its history when it interned over 100,000 of its own Japanese American citizens.

But why would Venice High School students care? They had no role in signing Executive Order 9066.

Armed with the knowledge that public service can be a tool for social change, Scott Pine and his fellow Venice classmates helped initiate the formation of the Venice Japanese American Memorial Marker (VJAMM) committee to honor and never forget the over 1,000 persons of Japanese ancestry from Venice, Santa Monica, and Malibu who were forced to gather at the corners of Venice and Lincoln Boulevard to await transport to internment camps during World War II.

In 2009, Pine and his fellow classmates presented their case to the Los Angeles City Council and gained unanimous support to erect a commemorative monument at the historic site on Venice and Lincoln.

But past injustices are not the only areas Scott is concerned with, he is currently a psychology research intern at UCLA’s Psychology of Social Justice Lab.

Additionally, for over a year, Pine has worked with the chair of the SMC Psychology Department on various research projects investigating issues of critical thinking and leadership.

Scott’s approach of combining research with social change has already proven a powerful formula, and following his trajectory, it appears that he’s well on his way.

He is transferring to UCLA this fall.