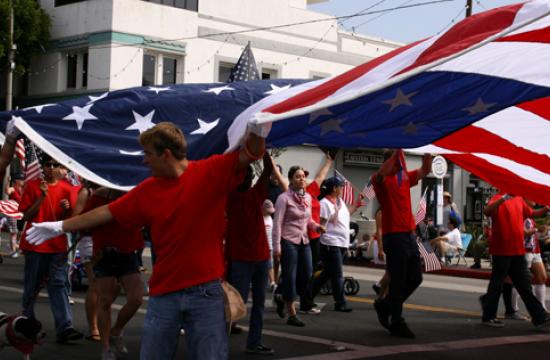 “Main Street meets Doo Dah,” described Lori Nafshun, the Ocean Park Association (OPA) force behind the Main Street 4th of July Parade. “It’s a parade for everyone, for our political leaders and for the fun loving and the wacky. It’s very Santa Monica and it’s special.”

The theme of this year’s parade is heroes, which will be held at 9:30 am on Thursday, July 4.

“We honor the heroes who were the founders of the United States and express our patriotism and our allegiance to the principles of our democracy,” Nafshun said. “We also honor our own local heroes. And everyone has their own personal hero. Heroes come in many shapes and sizes. OPA invites everyone to come to the parade and let us know who your hero is.”

The Grand Marshal and Santa Monica Hero is Police Chief Jacqueline Seabrooks. Embracing the theme of the Parade she stated, “Just as those who fought for this country’s independence were the heroes of their time, those who fight for the safety of our community on a daily basis are today’s heroes. I am fiercely proud to represent today’s heroes, the men and women of the Santa Monica Police Department. I am privileged to be able to celebrate our heroes past and present not only as our parade’s Grand Marshal but also as this community’s Police Chief and I’m loving it.”

Keeping the faith with sustainability all dignitaries will ride in electric cars. Vintage cars are the exception to the green rule. And the low riders will be back again this year!

Parade music will be as eclectic as Santa Monica and will feature everything from the Samohi Marching Band, The Mariachi Conservatory, the Santa Monica Youth Symphony, the Americans, the FU Dogs and more.

Bike groups Bike Attack and the Freedom Riders and lots of neighborhood kids on decorated bikes will be in the parade.

As Nafshun says, “cyclists are heroes too – showing us how to change our ideas about transportation.”

What’s a parade without music and school kids, local dignitaries and local groups and horses?

Local groups the Running of the Grunion and the Euclideans as well as local schools SMASH, the Edison Language Academy, the Growing Place, and Mount Olive Preschool will all be strutting their stuff. And lots more.

To register to march in the parade go to www.opa-sm.org/parade by this Monday, July 1. Registration is free.

Nafshun encourages everyone to follow the green theme and bring their own multi-use water bottle.

“The parade was started in 2007 by a handful of people at OPA but it was really Lori who had the vision and the tenacity to make it happen,” Brand said. “Santa Monica didn’t have a 4th of July parade. It didn’t have a community celebration on the 4th. OPA believed Santa Monica would be a better place with a small town Independence Day parade where everyone could participate. We have a fantastic community here in Santa Monica and we can’t do enough of these community events that help to bind us together.”

Brand said it took a lot of conversation and cooperation between OPA, City staff, and the Council for everyone to understand why it was so important to Santa Monicans and to the City to have the parade.

“The late Council member Ken Genser was especially supportive and helpful,” he said. “It is people like Lori that make our City a great City. She does this work because she loves Santa Monica and this parade is truly Santa Monica.”

“When Lori suggested the idea for the 4th of July parade we all thought she was nuts,” Winterer said. “Finally OPA decided we had to go for it. After endless meetings and overcoming obstacle after obstacle we knew we were going to be able to pull it off but it wasn’t until the finish of the first parade when we realized it had succeeded beyond our expectations; that it was easy to look at doing it again and again. We were elated.”

The OPA Main Street 4th of July Parade has, in seven short years, become a beloved institution in Santa Monica.

This Independence Day Parade is one of many parades in cities across the United States in lauding and honoring the heroes of our nation’s founding.

We are particularly Santa Monica when we laud and honor our own local heroes.

So we appreciate this time of joining together in expressing our patriotism and our gratitude for the freedoms of our country.

We thank OPA and all the volunteers and sponsors and supporters of the parade.

In our daily safety and in our sorrow at the recent tragedy at Santa Monica College we are grateful for our Police Chief Jacqueline Seabrooks, the Grand Marshal of the Parade.

And we thank our Hometown Hero Lori Nafshun for her vision, her tenacity, and her commitment to building community in Santa Monica.

Happy 4th of July to all! See you at the Parade!