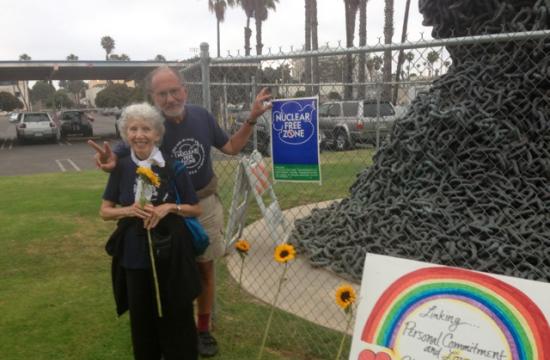 They were also commemorating the anniversary of the world’s largest rally calling for global nuclear disarmament, which took place June 12, 1982 in New York’s Central Park.

The Rubin’s started their evening walk at the late Paul Conrad’s 26-foot-tall monumental peace sculpture, which has been standing in the Santa Monica Civic Center since 1991 warning of the dangers of nuclear escalation.

They were joined by a few friends as they also walked to the ‘Children’s Tree of Life’ in Santa Monica Palisades Park where the Rubin’s had been married in 1983.

They placed sunflowers, which are symbolic of hopes for a nuclear weapons-free world, and a ‘Nuclear Free Zone’ poster at the iconic public art peace sculpture that the Conrad family and community are working to save and restore.

The Rubin’s also placed sunflowers at the Tree of Life as well as at Santa Monica City Hall. Here they are shown at the conclusion of the walk.

The Rubins offer many thanks to everyone helping to save the landmarked peace sculpture.

To donate to restore ‘Chain Reaction’ visit ConradProjects.com or facebook.com/SaveChainReaction or call Jerry and Marissa at 310.399.1000.