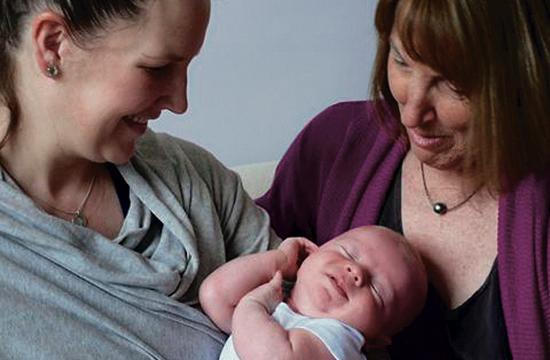 In addition to her 30 years of experience and 2,500-plus births, certified nurse-midwife Deborah Frank has one more achievement to add to her already impressive resume. Frank has become the first nurse-midwife to be granted “admitting privileges” at Saint John’s Health Center, giving expectant mothers the choice of midwifery care in a hospital setting.

After assisting a Peruvian physician with home births for two years, Frank knew this was a path she wanted to continue.

“I considered going to medical school or nursing school,” Frank said. “In nurse-midwifery, I found a good match. I was interested in health promotion, prevention, and continuity of care.”

Frank relocated to Los Angeles in 1982 after completing a nursing degree from Duke and a graduate program in midwifery from Yale.

In Los Angeles, Frank said it was uncommon for nurse midwives to work in hospitals.

For this reason, Frank’s admitting privilege to Saint John’s is quite a feat.

Her private practice in Beverly Hills, Midwives With Women, was established in 2003.

Her clients come from all over – Beverly Hills, Ventura, Santa Monica, and Long Beach.  Now that she has admitting privileges at Saint John’s, it allows her to give expectant Santa Monica mothers the opportunity to go to a hospital in their immediate community with a nurse-midwife.

“Santa Monica is exciting,” she said. “Saint John’s is more of a community hospital and the Santa Monica community is notable for its interest in health and health maintenance. The community is also interested in non-traditional medicine as well. It’s a good fit for my practice.”

Delaine Martin will be Frank’s first patient to deliver at Saint John’s around the end of June.

“I chose midwife Deborah Frank to deliver my first child at UCLA Reagan and it was the most amazing experience,” Martin said. “Now, I am pregnant with my second child, so I was thrilled to hear that I can go to my neighborhood hospital, Saint John’s Health Center, and give birth there with Deborah as my midwife.”

All over the world, midwives are the primary providers for maternity and health care. Currently in the United States, nurse-midwives are responsible for 8 percent of overall obstetrical care and 12 percent of vaginal births.

Frank said these figures are an increase to when she first began her midwifery work.

She believes the steady increase can be attributed to the fact that midwifery is an obvious choice.

“Midwifery care is a clear solution to some of the needs to change up the overall healthcare plan,” she said. “Most births are normal births and there are many studies that show midwives provide excellent care with great outcomes and lower Caesarean section rates at lower costs.”

Frank said she is interested in learning how to make this cultural shift towards nurse midwifery.

“I spent my educational path studying how to support normal births, in contrast to an OB who studies how to handle complications,” she said. “You wouldn’t go to a heart specialist if you had a simple health problem, so too if you are planning on having a normal birth, a nurse-midwife is a good choice.”

Midwifery is not as popular here as it is in other, developing countries, but Frank’s midwifery practice always has plenty of expectant mothers.

Her practice is unique, however, in that she is only able to take on a small number of women each month due to the labor and time midwifery requires.

“The medical model of obstetric care is that you go into labor, you go to the hospital, and only at the end of the process does the physician come in,” she said. “As a nurse-midwife, I would be able to see a woman, and her family, throughout her pregnancy, deliver her baby and then provide gynecologic care in the years that followed.”

To learn more about Deborah Frank, her services, and her practice, visit midwiveswithwomen.com.