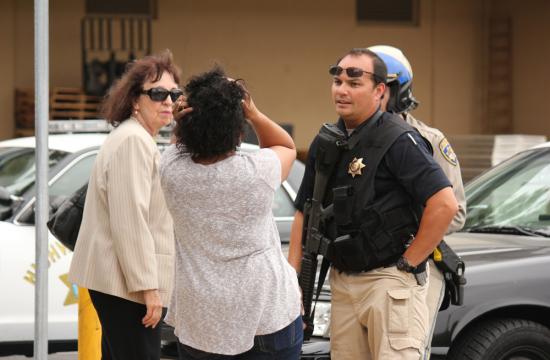 Mayhem is unfolding at Santa Monica College with reports of multiple victims after a shooting took place around noon near the campus.

The LA Times is reporting three people were shot inside a car either on the campus or near the campus.

The Times reports that a suspect was found in the SMC library and taken into custody.

“There have been reports of a shooter on the main SMC campus,” an email alert to SMC students read at 12:32 pm Friday. “The college is on lock-down. This means that if you are on campus, stay out of open spaces, stay in doors, lock all doors and do not open the doors until you receive an all clear from college officials. If you are off campus, do NOT come to campus.”

Update 1:28 pm: A California Highway Patrol spokeswoman said the CHP received initial calls starting as early as 11:55 am of a man carrying several weapons and firing at passing cars and bus.

“After that custody was taken into custody, we continued to receive reports of shots fired,” the spokeswoman said. “There is still a search going on in the area for additional suspects.”

KTLA5 is reporting that a dead body has been found in a house fire in the 2500 block of Kansas (7-8 blocks away from campus), but there is no confirmation that it is connected to the shooting.

However, there is a car riddled with bullets right in front of the burning structure.

One of the victims was a middle aged woman who was on a bus near the campus.

A witness, who was on the bus at the time, told KTLA5 what she saw.

“The bus came to a stop at a red light,” the witness said. “There was a car honking behind the bus. There was another car parked next to bus. A man got out of the car on the left hand side of bus, the driver side, pulled out a rifle and started firing at the bus. People were screaming and hitting the floor. All of the passengers took immediate cover. There was a lot of panic. There was woman who was hit by a bullet. The shooter was a male wearing black clothing, slightly dark skin.”

Update 2:03 pm: A resident in the 2500 block of Kansas (near Stewart) spoke with KTLA5 describing what she saw in regards to the house on fire.

“I was walking in my house and I heard gun shots and called 911,” the witness said. “While I was on the phone to 911, the operator and I both heard additional gun shots and then I saw smoke pouring out of the house across the street. I ran into the front yard to see what was going on. I saw a woman had been shot in the car that was riddled with bullet holes. Apparently one of the occupants had taken the life of his father, set the house on fire, and then car jacked someone to take their car. Another lady got in the way, and he shot her, an innocent bystander, and took the car jacked car down to Santa Monica College.”

A Santa Monica Fire Department spokesman confirmed that two dead bodies have been found inside the burnt out house — both male.

Update 2:22 pm: KTLA5 has spoken with another witness, Jerry, who heard the gunman fire shots inside the house on the 2500 block of Kansas as she lives right across the street from where the house fire happened.

“A little before noon my son left the house and then almost immediately I heard gun shots and I ran out because I feared for him,” Jerry said. “Luckily he was gone. There was a guy outside right in front of my place with full SWAT gear, a belt full of ammunition and a semi-automatic rifle. The first six shots he had fired inside the house or at this house across the street and it was on fire. The first thing I noticed was smoke coming from across the street. He had a bag lying in the street. He glanced up at me. He walked over here to this corner, this intersection. He pointed a gun at a woman in car and told her to pull over, which she did. The woman behind her in a car, he waved her through with a gun, she kind of hesitated and slowed down. He fired three or four shots point blank into her in the car. The car ended up in my driveway. I ran inside to get the phone to call 911. When I came back outside he was getting into the blue car with the first woman. He had thrown a bunch of stuff out the car. They were driving off. We just got towels to put pressure on this woman’s wounds. She is going to be okay. She was talking.”

Jerry said she recognized the shooter as the son of the man who lives in the house.

She they were a Lebanese family — a father with two sons.

More to come on this developing story.