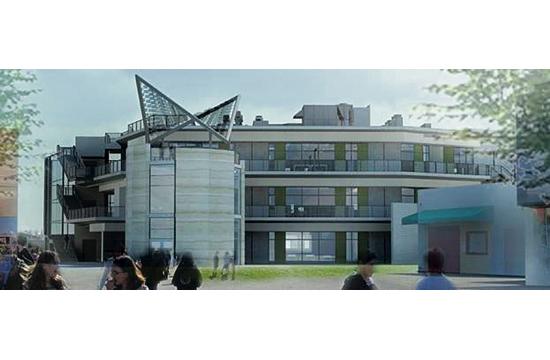 Development Agreements (DAs) appearing in front of Santa Monica’s City Council might be a common occurrence, yet a DA proposing something other than new residences or businesses is about as rare as last week’s “Super Moon.”

Council members on Tuesday approved a DA to expand Crossroads School for Arts & Sciences to include a new three-story, 12-classroom science-learning center at 1731 20th Street in the Light Manufacturing Studio District.

The site currently contains two buildings with five classrooms that would be removed as part of the project resulting in seven net new classrooms.

During construction, three temporary modular classrooms will be erected.

A sneak peek into the project reveals the applicant proposed to provide 235 parking spaces, one shy of the 236 spaces required under the City Code.

A few community benefits negotiated as part of the new science center at Crossroads: an enhanced Transportation Demand Management (TDM) plan; and, the school must “provide an undeveloped area 10 feet in width along the southern property line … for the future development and public use of the Michigan Avenue Greenway bike path.”

City staff and Crossroads also agreed to have photovoltaic panels installed on the side of the building and for the roof to be solar panel-ready.

Crossroads ensured it would aim to have the new building meet LEED Gold equivalency, while the school will engage in outreach to the Pico Neighborhood to offer potential students from priority for financial aid and the school’s Summer Program.

A key element of the DA involves both Crossroads and Santa Monica exchanging land easements; the easement acquired by the City would be used to develop the Michigan Avenue Greeway bike path.

Council members were posed with two questions prior to considering the Crossroads DA: is the building’s proposed design and sign plan “appropriate and compatible with the neighborhood” and the Crossroads campus; and, “whether the proposed plan and proposed community benefits are consistent with the objective, goals, general land uses, and programs specified in the general plan.”

However, the council focused its discussion on the solar panel element of the DA. Council member Ted Winterer asked the school how soon it would install the roof solar panels.

Council member Gleam Davis was worried that requiring the school to install rooftop solar panels within a set timeline may have the unintended consequence of forcing Crossroads officials to decide between allocating scarce resources to energy efficiency or funding scholarships and other student-friendly initiatives.

A Crossroads official told Council members the school would raise all the funds to construct the proposed building from private donors.

On a recent visit to Crossroads, Council member Tony Vazquez observed the campus was “deplorable” and the proposed DA needed to be fast-tracked.

All council members voted in favor of the DA; Council member Bob Holbrook, who recently had knee surgery, voted via phone.

The council also voted unanimously in favor of a resolution approving the final parcel plan for 1621 Franklin Street, where a four-unit condominium project is proposed.