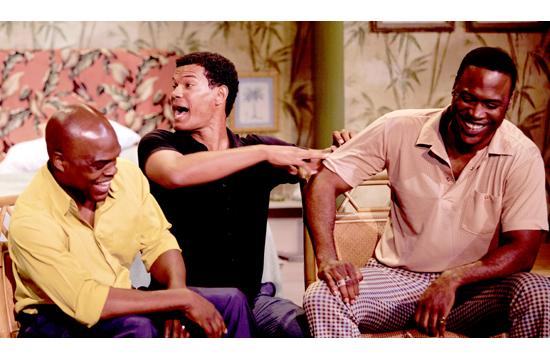 This is the exciting backdrop for Kemp Powers’ riveting comedic drama, “One Night in Miami…”

Invoking poetic license, Powers takes us through a hypothetical gathering of Clay’s closest three friends, all of whom are at pivotal points in their careers, and creates a powerful, entertaining evening of theatre.

While two threatening Nation of Islam bodyguards assigned to watch over Malcolm X hover nearby (Jah Shams and Jason E. Kelley), Clay’s buddies want to party but Malcolm, who thinks he’s being followed by Hoover’s henchmen, puts the kibosh on alcohol and women and instead offers his friends vanilla ice cream followed by political lectures.

Friendly, funny banter ensues and after much joking around, Clay shocks his friends when he tells them he’s converting to Islam. They try to talk him out of it, saying that it could hurt his career and although Clay wavers a bit, sticks to his decision.

As the evening progresses, Malcolm attacks his friends telling them they should also join the Nation of Islam but Brown jokes that he is not willing to give up “pork chops and white women.”

Later, he questions why all the activists appear to be light-skinned.

Malcolm laces into Cooke, denigrating his music, and scolds him for not using his celebrity to become more political to further the cause.

He cites Bob Dylan’s “Blowin’ in the Wind” as a white man who wrote a song that “speaks to the souls of black men” chiding Cooke for not writing a song like that.

Cooke defends himself saying that by having his own publishing company and owning his masters, that he is not only in control of his music, but helps other black singers by having their songs sung by such white groups such as The Rolling Stones, thus generating substantial royalty checks.

Malcolm hammers away and eventually Cooke gets angry and storms out of the room.   When he returns, in his own defense, sings an unreleased song that he had written called “A Change is Gonna Come,” demonstrating that while he is a huge commercial success, he does have deep political awareness.

Alone for a while with Clay, Brown, who is considered the greatest player in NFL history, confides in Clay that he is in pain all the time and is thinking about an acting career. His friend responds that football is his life to which Brown says that football is really just a job.

He gives a wonderful performance capturing both the power of the young boxer as well as his boyish innocence.

Ty Jones as Sam Cooke literally brought the house down when he sang a Gospel version of “You Send Me.”

This most talented actor captured every nuance of his character delivering a multi-dimensional, commanding performance.

Jason Delane as Malcolm X gives a mesmerizing performance as a haunted man both committed to his principles as well as suffering from growing paranoia which history shows us was well founded.

Delane’s skilled characterization captured both the physical and psychological complexities of a most complex man.

Rounding out the three friends is an imposing Kevin Daniels as the bigger-than-life football player Jim Brown.

Daniels has effectively created a fun-loving guy who doesn’t want to take life too seriously and appears to care less about his friend Malcolm’s mission.

Rounding out this talented ensemble are the two Nation of Islam bodyguards played by Jah Shams as Brother Jamaal and Jason E. Kelley as Brother Kareem.

Shams’ character, while appearing to be somewhat of an airhead, is multi-layered and perhaps offers the biggest surprise of the evening.

Jason E. Kelley’s fascinating performance as Brother Kareem gives us a look into the rigidity and almost blind obedience to a cause and a willingness to do whatever is expected of him.

His character was the most foreboding and Kelley’s performance captured the essence of this deeply committed man.