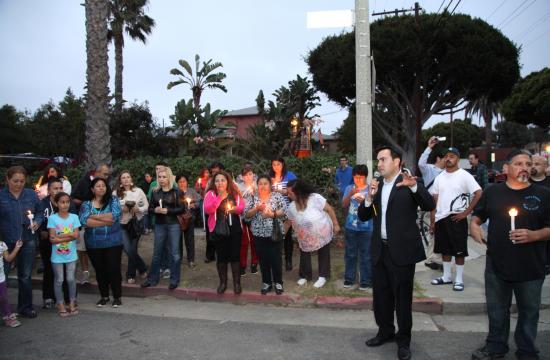 It was held in response to the rash of shootings and the persistence of gang related homicide in the neighborhood.

Oscar de la Torre, Pico Youth & Family Center founder and SMMUSD school board member, said he hoped the event would erase the negative imagery of last week and replace it with positivity, love, and peace.

“It’s a wake up call to the city leadership that we must not regress in supporting our young people, that we must not regress in giving young people hope and providing services to prevent gang violence and to ensure that Santa Monica is best known not for the violence that affected our neighborhoods but for the good will and the love and the unity of our community,” de la Torre told The Mirror.

Jaime Cruz, a longtime Pico neighborhood resident, spoke about remembering those who have been killed.

“Since 1986, I’ve noted 60 people who have been killed to the senseless violence in the Santa Monica Pico neighborhood,” Cruz told The Mirror. “Often times we don’t humanize these individuals. We don’t depict them as being somebody’s child or father, so we want to acknowledge that and bring their name and dignity to these folks.”

The June 7 shooting rampage resulted in the death of six residents was followed by two shooting incidents — one Sunday afternoon and one Tuesday morning — that left one dead and two others with serious injuries.

Gil Verastegui’s tragic death on Tuesday, June 11 marked the 49th time since 1989 a family has suffered a loss due to homicide in Santa Monica, the majority of these homicides occurring within an eight block “red zone” in the Pico Neighborhood.

The procession started at the corner of Kansas and Yorkshire, the focal point for the June 7 shooting rampage that ended at Santa Monica College. It proceeded down Pico Boulevard to the site where Verastegui was killed last Tuesday.

The Pico Youth & Family Center (PYFC) along with various community groups have also called for a Townhall Meeting on Violence Prevention scheduled for Thursday, June 20 at 6 pm to engage the community in a discussion on proactive policy solutions to violence and trauma.

“We invite residents, youth, clergy, parents and community leaders from Santa Monica and beyond to support our movement for peace, unity and social justice. We cannot let the tragic death of our community members happen without a renewed commitment to building a safer community,” said Francisco Juarez, PYFC Board Member and Vietnam Veteran.