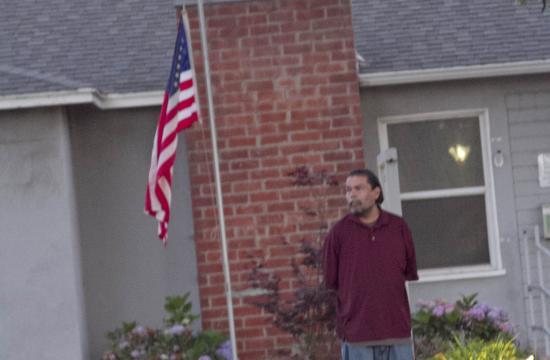 On any given weekday morning, Margarita Gomez could be seen rolling her cart through Santa Monica College, collecting bottles and cans.

On campus, she was known as “The Recycle Lady.”

Many assumed she was homeless, in need of money.

The truth is Gomez was diabetic and just following her doctor’s orders to exercise.

The money she made from recycling was always donated a portion to non-profits.

“That’s the worst thing,” said her granddaughter Janette Torres, 21. “She didn’t need to collect bottles; it was more like a hobby. This is her neighborhood.”

On Friday, June 7, Gomez left her home across the street of Pico Boulevard and broke her weekly ritual, visiting the campus on a Friday.

Still in a state of shock, her family, along with friends and neighbors, gathered Sunday at SMC to mourn their loss.

Sgt. Romano led the family (from the point where Gomez was hit) across Pearl Street where Margarita’s body was taken out of harm’s way.

According to Romano and many others, Gomez was a familiar, welcome presence on the campus.

The Sergeant pointed to the flag in front of the SMC police station which stood at half mast in honor of all those in the community who fell.

He exchanged information with eldest son Gabriel and then made a promise.

“We want you to know that we are with you,” he said. “We really mean this, we are here for you. All counseling services are available for you and your family.”

According to SMC President Dr. Chui Tsang, Gomez was also active in the Senior Latino Club that meets every Thursday at Virginia Avenue Park.

She regularly donated a portion of the money from her recycling activities to the club, which contributes support to organizations such as St. Jude Children’s Research Hospital.

The Santa Monica College Foundation has established The Margarita Gomez Family Memorial Fund in her honor.

Visit foundation.smc.edu/GomezMemorial for additional information or to make a donation.