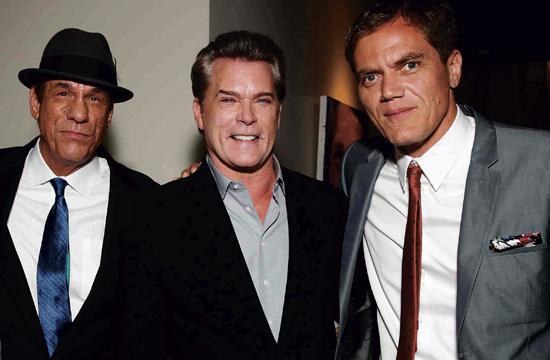 The name Robert Davi might not be immediately recognizable until you see his face and then you’ll remember that he is one of the film industry’s quintessential tough guys going as far back to 1996 when he played a villain in “Profiler.”

Since then he has played an assortment of supporting roles including a Palestinian terrorist and the principal bad guy in “License To Kill.”

Davi has worked alongside some of the finest actors in Hollywood including Marlon Brando, Bruce Willis, Arnold Schwarzenegger, Clint Eastwood, Benicio del Toro, Danny Glover, and Adam Sandler and is the only actor to appear in all three of MGM’S biggest franchises – “James Bond,” “Pink Panther,” and “Stargate.”

Davi’s first love was singing and he studied opera with the intention of becoming a singer who was also a good actor, but as fate would have it, his success came through his acting.  He idolized Frank Sinatra who chose him to play Mickey Sinardos in the 1977 NBC television drama, “Contract on Cherry Street.”

Subsequently, in pursuing his musical dream, in addition to Las Vegas appearances, in tribute to Sinatra, Davi recorded an album entitled “Davi Sings Sinatra, On The Road To Romance.”

An imposing 6’2” and wearing a stylish black hat, this friendly gentleman recently sat down with a select group of journalists to discuss, among a variety of topics, “The Iceman,” one of his films in current release in which he plays, yes, a gangster.

Directed by Ariel Vromen, the cast includes Winona Ryder, Ray Liotta, and Chris Evans and is the story about the famous contract killer Richard Kuklinski with Michael Shannon in the starring role.

The following has been edited for content and continuity.

What was the most fun part of this film for you?

Davi: I think doing the whole thing. The scenes with Ray (Liotta) and Michael (Shannon). How could you go wrong when you’re working with great artists, great actors; it’s just fun and Ariel (Vromen), the director, was great to work with. He’s very open and talented and I liked his approach to the material. It wasn’t just something that was a shoot ‘em up, bang, bang, but was delving into the psychology. He captured that very interesting psychological moment when Kuklinski kills the homeless guy that, if you’re going to ingratiate yourself to the underworld guys or to some of those mobsters, you might get a task. You want to be in the club? Come on.

People seem to get more upset about the possible harm to the cat than all the people Kuklinski killed.

Davi: Let me tell you something. I wrote a story about that for the Washington Times several years ago. I’m an animal guy and the title was “Our Pets Are Family Too” and in it I referenced an article I read in the 80s in the Los Angeles Times about an incident that took place in Washington, D. C. People were looking up at a building and they were yelling to the person who was going to jump, stay, stay, stay, don’t move. Cut to another city with the same scenario. They were saying, jump, jump, go ahead and jump.  And then it said in the story that there was an elderly couple that were beaten and mugged by a gang of kids and their dog was killed. The reference was that city in which they were telling the person to stay, there was a dog on the ledge. In the city where they were saying jump, it was a human being.  The article also said that if kids had grown up with a pet, they probably couldn’t have killed the dog, nor could they have hurt the human beings.  So, animals help us to be more human in a certain way so I wrote this whole article about that which led us to wanting to have a tax deduction for our animals and I actually had a Congressman write up legislation for it called “The Happy Act” – helping animals and people partner through the years where you get up to a $3,500 a year deduction for your animals.

Did you have a pet when you were a kid?

Davi: Let me put it this way. I won’t go do anything crazy, but yes, I think animals are an important part of our lives.

So you’re a “No Fur” with a line drawn through it?

Davi: I’m not a no-fur guy but anything that makes sense to me, that I feel is inhuman. A friend of mine wrote a book where he takes Biblical references about animals. He humanizes them and I think there is something to be learned from that. You know, respect for creatures.

Do you think the mob played a role in any way in curtailing violence?

Look at our society today – how violent it is. It’s more violent than I ever remember.

The mob was probably a good thing because it kept the hierarchy on the streets that we no longer have. There was a code of honor and a code of ethics that the mob had that certain things couldn’t be done. I don’t think this Boston thing could have happened 25 years ago because there were eyes and ears. These guys were watching their communities. Nowadays, it’s just a free-for-all.

Is there was something to be said for Mafia justice?

Davi: You know what? It started out in a town in Sicily called San Guiseppe. In San Guiseppe it was the night of the first rite and what was happening was guys that were going to get married had their girls taken by the feudal lords and impregnated. The reaction they had against that started the Mafia and then it went against oppressive governmental regimes that were coming in and occupying Sicily.  So with Mafia justice, there’s no equivocating, there’s no lawyer bullshit. Just think of this. If you don’t have the money, you can’t fight a lawsuit but these guys could call a sit down in New York City where you could take your grievance and get a fair hearing. Unfortunately, some of the movies make them look like you have the lower echelon guys, but some of these guys were very bright and had a different sensibility going on. Yes, there’s larceny involved and a little mayhem that happens, but again it’s a warranted thing and not done outside of the community. And those hits are… It’s a nutty kind of a thing but it had more structure.

What drew you into acting?

Davi: Well, I remember as a kid my bedroom was also like the living room and I remember my mom watching this black-and-white television set and me waking up to the glare and then getting involved in watching movies with all those guys and her loving film and then going to the movies now and then and watching those great variety shows and those great personalities. You know, my Walter Mitty mind as a kid wanted to be on the inside of that world expressing myself.  I loved language and started to sing, so all of that.

Do you live in New York?

What do you find is the difference in the lifestyles of NY versus LA?

Davi: Well, New York is energetic and illuminating. L.A. is introspective and I needed to be more introspective, you know what I mean? I was into the American Indian culture and read a book called “Seven Arrows.” There was a mandala and it said that the north, the south, east and the west and that the north was wisdom, the south was innocence, the west was introspection, and the east was illumination.

The reason the Indians were nomadic was in order to become fully integrated, they travelled as medicine to get parts of themselves fulfilled. So I had the northeast, what I needed was the southwest so I came here to get that other aspect. L.A. is a gentler lifestyle than New York, but again, there’s nothing like going to that city and I go quite often.

Do you think New York has the greatest pizza?

Davi: The best, although Vito’s on La Cienega is good. He’s got the yeast from over 200 years ago from Naples from which he makes the dough thin and crispy.

Do you make a good sauce? (Actually called gravy in New York)

Davi: You know I can but I don’t do it often, but I made one recently and it was great.  It was so fresh. I had gotten a bunch of these new, ripe tomatoes, but I’m glad you all liked the film.

We almost forgot that part of the interview (laughter).