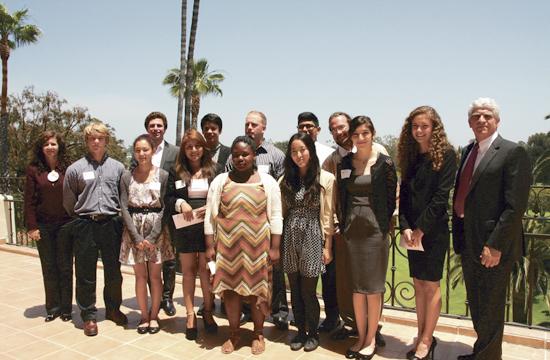 Thirteen students who have excelled in academics, leadership, and community service were recognized at the 2013 Rotary Club of Santa Monica scholarship awards held May 31.

Olympic High School student Kimberly Aguilar received a $1000 scholarship in the name of John English, who served as president of Rotary in 1947-1948.

The club awarded a $1000 scholarship to Saint Monica High School graduating senior Jose Molina in honor of Tom Fox – owner of Fish Lumber in Santa Monica, who served as Rotary President in 1955-1956, and as President of other local charitable organizations.

Each year, the law firm of Harding, Larmore, Kutcher, & Kozal funds a $1000 scholarship to an outstanding student from New Roads High School. This year’s recipient was Mona Yuki Moriya.

The club awards two $1000 scholarships to graduating seniors at Samohi in the name of Russell Hart (Samohi Hall of Famer, Rotary present 1929-1930, former Chamber president, and former Mayor). These winners were Zaire Overton and Julian Mickelson.

The club’s third Samohi award for $1000 is given in honor of Clyde Smith, who passed away in 2009. This year’s recipient was Marisol Gonzalez.

The club’s final presentations were to three students from Santa Monica College. The first scholarship for $1000 honors Nick Holt, who died in 1981 at the very young age of 38. The award went to Christian O’Donnell.

The Rotary Club honors Mr. Archie Morrison (former educator at John Adams and SMC, ultimately serving as a Vice President of SMC) through two $750 scholarships to SMC students. These recipients were Clinton Clad-Johnson and Jasmine Jafari.