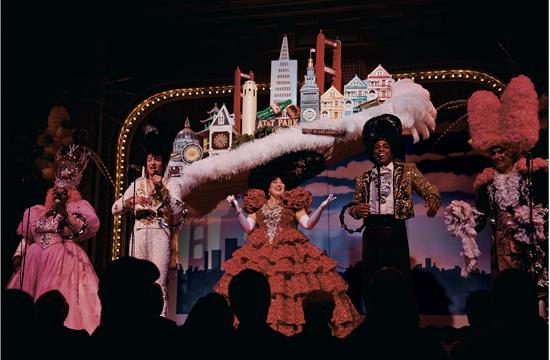 The much-celebrated fog creates a romantic mood in this most European of American cities.

San Francisco has well over 32,000 hotel rooms, from first-class hotels and ultra-chic boutique hotels to familiar names in lodging and budget friendly inns.

In the heart of San Francisco’s Financial District is Galleria Park Hotel, which exudes a timeless yet vibrant style.

It combines its original Art Deco and Art Nouveau design with contemporary elements and services, for a one-of-a-kind experience.

This summer it will complete an 18-month multi-million renovation to celebrate its rich heritage and enhance its stylish appeal.

The Galleria Park Hotel is built upon the site of the former Lick House, recognized as the country’s finest hotel west of the Mississippi when it opened in 1862, and the Occidental Hotel, described as “Heaven on a Half Shell” in Mark Twain’s novel, “Roughing It.”

The Lick House and the Occidental Hotel reigned as San Francisco’s Grande Dames until they were destroyed by the 1906 Earthquake and Fire.

The prime location at the corner of Kearny and Sutter streets gave birth to the Hotel Sutter, today’s Galleria Park Hotel, in 1911.

The Galleria Park Hotel is the most historic property within the Joie de Vivre collection.

“Throughout the decades, San Francisco’s grand sense of hospitality has survived and thrived to make it one of the world’s most popular destinations,” said James Lim, regional managing director for Joie de Vivre Hotels. “We are honored to be part of this tradition and strive to be as relevant today as the Lick House and Occidental Hotel were more than 150 years ago.”

As part of the renovations, there will be a chic redesign of the hotel’s 177 guest rooms and suites.

There will be the introduction of Franck LeClerc’s Gaspar Brasserie, where guests can savor French fare by celebrated chefs Brigitte Batson and Patrick Kelly.

The restaurant will span two stories and showcase an eclectic mix of vintage design pieces and two bustling bars for a lively dining experience. LeClerc is famous for his family of French restaurants, including critically acclaimed Gitane.

The creation of the Legacy Room, which will replicate the Hotel Sutter’s speakeasy – will be complete with original design elements, historical memorabilia, and dark wood paneling for an authentic 1920s vibe.

New state-of-the-art equipment in the Fitness Studio boasting floor-to-ceiling windows and upgraded internet are on the way too.

In the true spirit of hospitality, the Galleria Park Hotel offers a hosted wine hour daily, complimentary Wi-Fi access and a pets-stay-free policy, welcoming dogs of any size with a bowl of organic biscuits.

The hotel is located at 191 Sutter Street, San Francisco. Rates start at $229 plus tax.

Grab A Bite At Americano

Just around the corner from Galleria Park Hotel is Americano, a restaurant located within Hotel Vitale at the junction of the revitalized Embarcadero waterfront and the Financial District.

Americano’s menu is handcrafted soulful, Italian cuisine with a robust sensibility. Its culinary style is rooted in lasting partnerships with area purveyors and showcasing seasonal flavors in every dish.

Since opening in 2005, Americano’s menu has been inspired by its location across from San Francisco’s Ferry Plaza Building, a mecca for local, sustainably-grown fare.

In keeping with Italian tradition, Chef Kory Stewart is devoted to handcrafting the cuisine at Americano using the best local products that are in season.

Touches of bold, vibrant colors, a striking chandelier, and plush seating create a lively and alluring atmosphere, all strikingly set off by panoramic views of the San Francisco Bay and the Bay Bridge.

The long, narrow dining room is flanked on one side by an elegant bar with comfortable barstools for single diners and ample seating and standing space.

The outdoor patio with aromatherapy gardens is open for lunch and nightly cocktails.

It is especially enjoyable during the warmer months for al fresco dining or a special event.

It is located at 8 Mission Street, San Francisco. For more information, call 415.278.3777 or visit www.hotelvitale.com.

Laugh The Night Away At Beach Blanket Babylon

Touted as the world’s longest running musical revue, Beach Blanket Babylon is a must see for anyone after a night of laughs.

The show is a musical spoof known internationally for its extravagant costumes, outrageous hats, show-stopping numbers, and hilarious puns of pop culture and political character.

The show follows Snow White as she takes a fast-paced journey around the world in search of her “Prince Charming.”

The show started in San Francisco on June 7, 1974, when Steve Silver produced a small show in the back room of the Savoy Tivoli Restaurant. The show was to run for six weeks – that was more than 39 years ago.

To date, it has been seen by more than 5.5 million people, including Queen Elizabeth II, Prince Charles and Camilla the Duchess of Cornwall as well as some of Hollywood’s biggest stars.