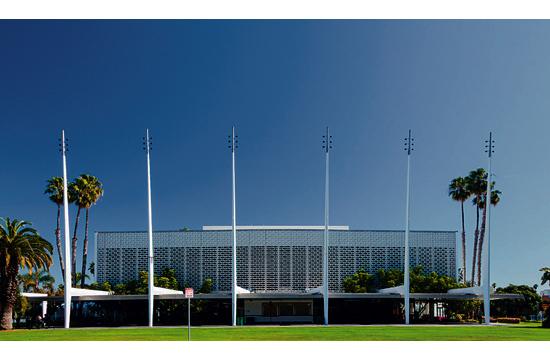 Santa Monica’s City Council follows up its two-day study session on the $1 Billion Biennial Budget with a discussion of how to potentially save a local institution victimized by recent budget cuts.

Council members will ponder options of how to keep the Santa Monica Civic Auditorium operational at its meeting this Tuesday. The venue, which was once home to the Academy Awards, is scheduled to go dark June 30.

The Civic Auditorium, according to City staff, has operated at an annual deficit as high as $2 million. A community meeting was held June 4 at Virginia Avenue Park to brainstorm alternatives of how to keep the Civic Auditorium open – and, ideally, profitable.

Council members will not make a final decision about the future of the Civic Auditorium at the June 11 meeting.

Instead, the council hopes to provide guidance on an interim use plan for the venue as well as come up with potential strategies of how to fund the Civic Auditorium’s renovation and operation. Also, the council will give staff direction on how to move forward with the community process.

In addition to brainstorming about the Civic Auditorium’s future, Council members will be voting upon three ordinances.

City staff recommends the elimination of a chapter of the Municipal Code addressing plumbing standards. Thanks to the success of the “Plumbing Standards” ordinance passed 20 years ago “to reduce potable water use and sewage” and require all buildings sold in Santa Monica to have “low-flow toilets, urinals, showerheads, and faucets installed before the close of escrow, the Municipal Code chapter was deemed by staff as an inefficient law on the books.

According to City Hall, it costs more to enforce the current law than any benefit derived from the enforcement.

Another ordinance up for council vote: exempting ground floor dining on private property from Floor Area Ration calculations within the downtown core. The same proposed ordinance might also extend the City’s Interim Zoning Ordinance until Feb. 28, 2014.

Finally, the council will vote on an ordinance that would “revise existing household income eligibility levels and rent limits for the Affordable Housing Production Program (AHPP), add an option for developers to provide affordable housing to households earning no more than 30 percent of the area median income,” or AMI.

All three ordinances are a first reading. In order for any of the ordinances to become law, it must receive a majority vote in favor during the first reading and then be approved in a second reading two weeks later.

During the Council member Discussion Items portion of the meeting, the elected panel will vote on directing staff to bring to certain development agreement (DA) applications to the dais for consideration immediately after the Downtown Specific Plan is approved. Specifically, the DA applications to be considered propose heights “within the maximum allowed for downtown in the previous… Land Use Element.”

There is also a plethora of items on the Council’s consent calendar, including: possible amendments to Farmers Market rules, regulations, and policies; a bikeway license agreement; the purchase of radio equipment for $2.5 million; and, the issuance of $8 million in bonds to finance 41 affordable housing units.

The council convenes June 11 at 6:30 pm inside its chambers at City Hall.