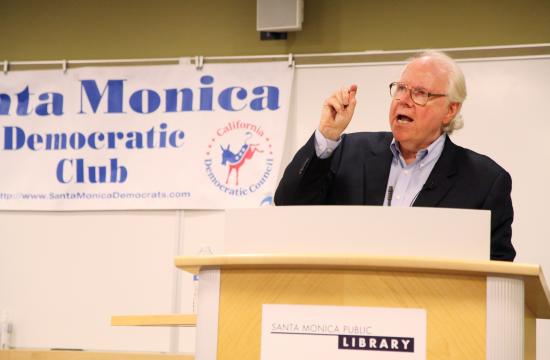 He is the Chair of the ACLU Foundation of Southern California; a founder and current Vice Chair of Interfaith Communities United for Justice and Peace; Vice Chair of Bend the Arc, a Jewish Partnership for Justice; and a Vice President of Death Penalty Focus.

At the SM Democratic Club event, Rohde vigorously condemned the deadly drone attacks on US citizens, authorized by President Obama, without judicial process, the detention and torture of prisoners for years without charges filed, and the lack of meaningful oversight and controls of US Government domestic spying .

Rohde called for the SM Democratic Club to pressure Congressman Henry Waxman and Senators Dianne Feinstein and Barbara Boxer to sponsor effective controls and/or abolition of these abuses.

A Q & A followed for concerned club members.