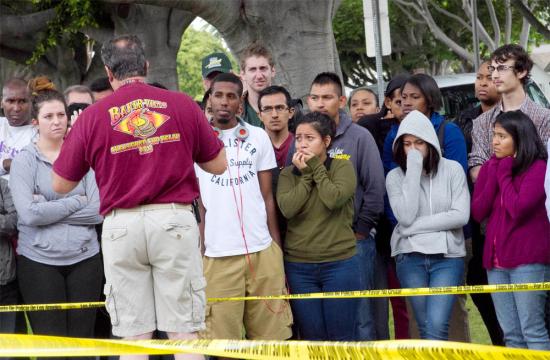 After a deadly crime spree in the Pico neighborhood that started late Friday morning, five people are dead, including the gunman, with another victim in critical condition.

A “person of interest” who was taken into custody on Friday afternoon was later released, with police saying the gunman acted alone.

Authorities have not disclosed a motive for the killings.

According to reports, Ronald Reagan UCLA Medical Center in Westwood said one shooting victim, who was shot in the head, is in critical condition and possibly brain dead and may not survive.

The start of the deadly crime spree began when residents on the 2500 block of Kansas Avenue heard gun shots late Friday morning in a home at their cross street in the 2000 block of Yorkshire.

“A little before noon my son left the house and then almost immediately I heard gun shots and I ran out because I feared for him,” resident Jerri Cunningham told KTLA5. “Luckily he was gone. There was a guy outside right in front of my place with full SWAT gear, a belt full of ammunition, and a semi-automatic rifle. The first six shots he had fired inside the house or at this house across the street and it was on fire. The first thing I noticed was smoke coming from across the street. He had a bag lying in the street. He glanced up at me. He walked over here to this corner, this intersection. He pointed a gun at a woman in car and told her to pull over, which she did. The woman behind her in a car, he waved her through with a gun, she kind of hesitated and slowed down. He fired three or four shots point blank into her in the car. The car ended up in my driveway. I ran inside to get the phone to call 911. When I came back outside he was getting into the blue car with the first woman. He had thrown a bunch of stuff out the car. They were driving off. We just got towels to put pressure on this woman’s wounds. She is going to be okay. She was talking.”

Cunningham said she recognized the shooter as the son of the man who lived in the house that was on fire.

She said they were a Lebanese family — a father with two sons.

The LA Times reports the father killed was 55-year-old Samir Zawahri, adding one of Zawahri’s adult sons was the other victim.

The shooter then drove towards Santa Monica College — about seven to eight blocks away — where he opened fired on a bus and several cars near the intersection of Pico and Cloverfield, striking at least one person, but not killing anyone.

As the gunman headed north, near 19th and Pearl streets, authorities said he fired into a red SUV, killing the man driving it and seriously wounding a woman in the passenger seat.

The suspect then fled to SMC, opening fire on people, before making his way towards the library.

A female was then shot and killed in front of the campus library.

SMPD Chief of Police Jacqueline Seabrooks said there was an exchange of gunfire and the suspect attempted to evade the officers.

Surrounding schools were placed on lock down while police searched through the campus to ensure there were no other suspects at large.

Santa Monica College students and employees can utilize counseling services at the Bundy campus on the second floor Saturday and Sunday 9 am to 3 pm. Services will be available on the main campus 9 am to 5 p.m.

For more information and details, please see the main website at www.smc.edu.