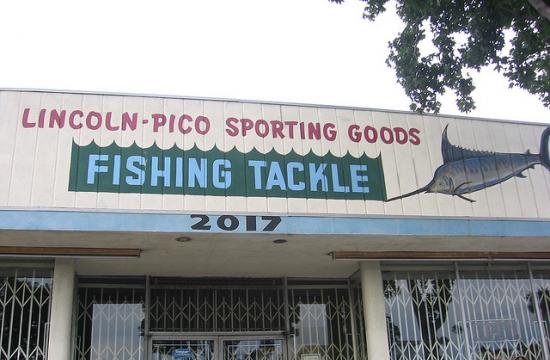 Santa Monica detectives are investigating an armed robbery that occurred at the Lincoln-Pico Sporting Goods store in Santa Monica just before 4 pm Wednesday.

SMPD Sgt. Richard Lewis told The Mirror that officers responded to the 911 call reporting the armed robbery at 3:52 pm at 2017 Lincoln Blvd.

“Two suspects entered the store and robbed the owner at knife point,” Lewis said. “The loss was several high fishing end rods and reels. The loss is estimated to be several thousand dollars.”

As the suspects fled in a waiting vehicle, Lewis said the owner gave chase after retrieving his hand gun from inside the store, and fired one round at the fleeing vehicle.

“He believed he struck the vehicle, but we haven’t received any reports of anyone at hospital,” Lewis said.

The suspects’ car was described as a black 1990s Honda Civic, Lewis said.

Anyone with information is encouraged to call the Santa Monica Police Department (24 hours) at 310.458.8495.