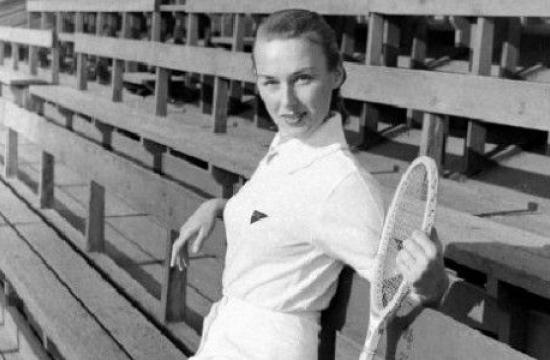 Storylines were aplenty within the tennis world this week as Wimbledon took center stage in London, with highly ranked superstars Rafael Nadal, Roger Federer, and Maria Sharapova eliminated from the world-famous tournament in the early rounds as well as an off-the-court cold war battle between the aforementioned Sharapova and Serena Williams.

However, none of those stories raised skirts like Gussy Moran, the pioneering tennis star and Santa Monica native who raised eyebrows with her envelope-pushing in-match wardrobe.

Council members unanimously voted as part of its June 25 consent calendar to commemorate Moran by renaming the Stadium Court at Reed Park in her honor. The tennis venue will now be called “Gussy Moran Stadium.” Signage around the court will be updated to reflect the name change.

Moran passed away in January. She was 89. According to City staff, her ashes were spread in the Santa Monica Bay after her death.

The tennis star was born in Santa Monica in 1923. According to City staff, Moran learned how to play tennis at 11 and graced the court at Samohi. Anecdotally, Moran played with Greta Garbo and Olivia de Havilland at Charlie Chaplin’s house.

Joining the amateur ranks in 1947, Moran was once the fourth-ranked tennis player in the world. Yet, Moran’s tennis play was not the only thing on the court drawing the audience’s attention. Fresh off her victory in the United States women’s indoor tennis championship in 1949, Moran set off to London where she played in Wimbledon’s quarterfinals. Moran made a fashion statement by donning a short skirt. During competition, her lace panties were conspicuously revealed.

A nickname was quickly bestowed upon her: “Gorgeous Gussy.”

As made evident when Roger Federer was dinged Tuesday for wearing shoes with orange soles, Wimbledon has an all-white dress code for all players participating in the tournament. Indeed, Tingling designed an outfit in all white – a silk top with a short skirt fully exposing all below the knees.

A simple observation of a photos showing Moran in action on the Wimbledon court revealed a lace-trimmed undergarment.

Moran debuted the outfit at a tea party just prior to the tournament, news reports both from Wimbledon in 1949 and after the tennis star’s passing observed.

After wearing the racy outfit during the quarterfinal match, Moran no longer wore the short skirt during the rest of her playing time in Wimbledon.

Moran retired from the amateur circuit one year later and played professionally in 1950. Her professional career did not last long, however, and Moran was soon relegated to competing in exhibitions tournaments and working in radio and television through the 1960s.

Life did not get much easier for her afterwards, publicly acknowledging she had abortions. During the Santa Monica centennial celebrations, it was reported Moran was found beaten and raped backstage at a Lawrence Welk concert.

Holding down a job – any job – was a chore. When cancer claimed her life earlier this year, Moran was reportedly living in a small apartment and left no natural heir; despite three marriages – all short-lived – Moran never gave birth.

Moran lived in the house she was born in – a Victorian home on Ocean Avenue – but was evicted in 1986 after she was unable to pay her property taxes.

Still, Moran left a legacy. Wimbledon tightened its dress code because of Moran. Various news reports point out Gussy Moran’s name was attached to a plane, racehorse, and special sauce at a restaurant.

A didactic sign will be visibly displayed and will include Moran’s biography, career achievements, and possibly a photo.

A dedication and tennis event is planned for later this summer or possibly in the fall.

According to City staff, the new signage would cost Santa Monica $1,200.