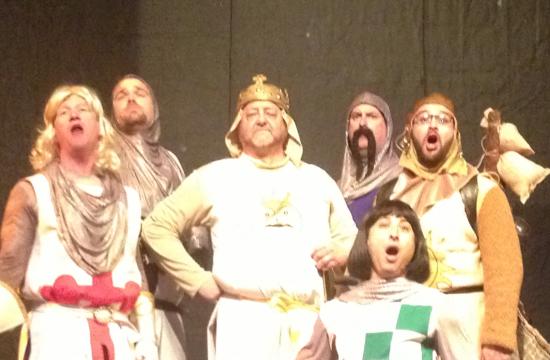 The production will run Fridays and Saturdays at 8 pm and Sundays at 2 pm through Aug. 3.

Lovingly ripped off from the classic film comedy “Monty Python and the Holy Grail,” “Spamalot” the musical was the 2005 Tony winner for Best Musical and tells the tale of King Arthur and his Knights of the Round Table as they embark on their quest for the Holy Grail.

Flying cows, killer rabbits, taunting Frenchmen, and show-stopping musical numbers are just a few of the reasons audiences everywhere are eating up Spamalot.

During its initial run of over 1,500 performances it was seen by more than two million people and grossed over $175 million.

Gesling most recently musical directed “Avenue Q,” which sold out all performances in a five-week run at the Morgan-Wixson.

She has been involved at the Morgan-Wixson for more than 25 years and also directed popular summer musicals “Crazy For You,” “Chicago,” and “A Chorus Line,” among others.