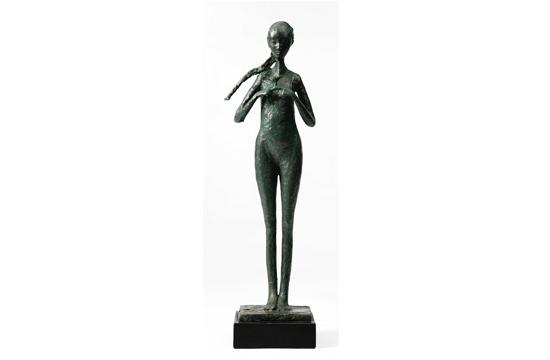 From an early age, Hadiya Finley found solace in her art.

The middle child of three, Finley had an autistic brother (later diagnosed with early onset schizophrenia), who pulled the focus from what would normally be an already overlooked middle child.

At a moment’s notice, all attention would be diverted to the explosive tantrums of her autistic brother.

Finley would retreat and focus on her art – creating magical objects out of everyday discarded items.

In her parallel universe, she was the featured player in her fantasy world.

“Even when my brother was not at home, I could feel his presence,” Finley said. “The books he had chewed retained the odor of his saliva and made everything in the room smell strange. I can remember realizing that this person was not normal and wishing that he was.”

Finley lived with the complex emotions that came from feeling invisible while mourning the loss of a “typical” big brother.

“These early experiences have helped me to develop my own strength, resiliency, independence, sense of compassion and acceptance, although it has taken me a lifetime to understand this,” she said. “The passion I had for making things has always been strong and in my early years helped to draw my attention away from my brother’s often frightening behavior.”

Now, years later, Finley, a sculptor with a family of her own continues to look within herself to create her art.

Starting with clay or wood, an original form is modeled of which a mold is then made to create the piece in wax, which will later be used for bronze, paper mache, or resin.

She then carves, cuts, and sands her sculpture to create the desired effect.

Many of her sculptures celebrate the female form – naked and vulnerable, yet featuring a sense of strength.

The work of Hadiya Finley will be on display as part of a group show entitled “Objectified II” at bG Gallery in Santa Monica this Thursday, June 20.

“Objectified II,” the second in a series takes the theme one step further by including the added dimension of exploring human and animal metamorphosis.

Gallery director and owner, Om Bleicher explains, “Doug has invited a great list of artists to explore object transformation from more varied perspectives. There is a lot of variety in their disciplines from highly academic to low-brow; the theme of the exhibit ties them together in a very interesting way.”

Bleicher admits he is looking forward to having Finley’s works included in the upcoming show.

“Hadiya creates charming metamorphic bronze figures that possess a humbleness that is rare in a contemporary artist…particularly a sculptor,” Bleicher said.

The opening reception for “Objectified II” will be held from 7:30 pm to 10:30 pm on Thursday, June 20 at bG Gallery, which is located at1431 Ocean Avenue in Santa Monica.

The show will remain on view through July 4.