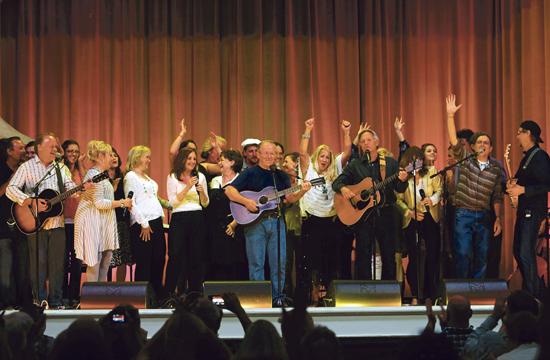 Who among us of a certain age doesn’t remember crowding around our Motorola black-and-white TV sets with 8 1/2- to 19 1/2-inch screens every Saturday night to watch “The Lawrence Welk Show” featuring the adorable, squeaky-clean Lennon Sisters who entertained audiences on his show for 13 years, beginning in 1965?

Born and raised in Venice, California into a strict Catholic family that eventually numbered 11 children, the singing quartet, consisting of Dianne (DeeDee), Peggy, Kathy, and Janet, ranging in ages from nine to 16, captured the hearts of the “Geritol” audience, singing mostly faith-based or spiritual songs with their sweet, four-part harmony.

Still singing after all these years, the sisters headlined the Third Annual Lennon Family Benefit Concert last Friday and Saturday evenings held at the Santa Monica Bay Woman’s Club where dozens of incredibly talented members of the sprawling Lennon family, including the wonderful local Venice Band, joined together for a rousing, four-hour concert.

What is particularly awesome is the phenomenon of that special musical gene being passed down from generation to generation beginning perhaps in the 1940s and 50s with the Lennon Brothers who sang with Paul Whiteman.

That special sound of the “Modernaires” and other swing vocal groups of that era, is quite apparent in the current Lennon family groups of performers such as “The Lennon Bros. & Gail Lennon” and “The Lennon Cathcart Trio.”

As one of the Lennons put it, “Our family proliferated like rabbits and at last count there were approximately 350-400 of us,” which includes aunts, uncles, and 270 cousins.

Many enchanting stories were shared throughout the evening with one particularly poignant story, and one that might illustrate “nature over nurture,” told by Venice lead singer Kipp, younger brother of the Lennon Sisters.

When he was a young man, he gave up a baby son for adoption but 24 years later he decided to find him.

His name is Charlie Vaughn and although raised by adoptive parents, when Kipp reconnected with him, Charlie was singing, composing, and playing the guitar.

It seems that Lennon musical gene can’t be crushed and together they performed a tender song about retirement, “I’m Sorry Mr. Jones.”

For this annual fundraiser concert benefiting Dr. Susan Love Research, B.R.A.I.N., My Stuff Bags, and the Santa Monica Bay Woman’s Club, 31 Lennon family members, many of whom live and perform in Branson, Missouri at the Welk Resort Theatre, gathered together with cousins and uncles from Ojai and Venice and kicked off the evening with a rendition of a rousing gospel number by The Byrds “There’s A Meetin’ Here Tonight.”

The now Lennon Sisters trio – Kathy, Janet, and Mimi (Diane retired but did join in throughout the evening) – sang a nostalgic set of standards including “When I Fall in Love,” “It Must Have Been Moonglow,” “Autumn Leaves,” and “You Go To My Head.”

The enthusiastic audience, packed with family, friends, and long-time fans, cheered wildly after each number, with the evening culminating in a tender “The Family Tree” sung by the 31 first, second, and third Lennon cousins.

May the branches of this family tree continue to grow, for such an exceptionally talented clan is truly a musical gift to us all.