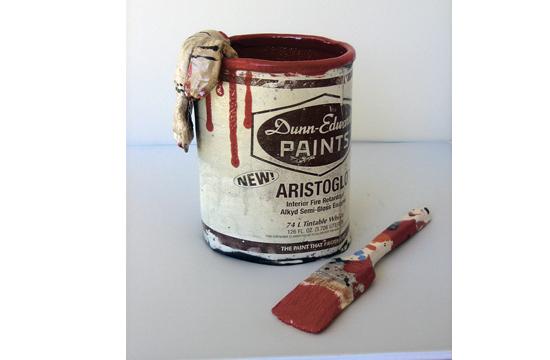 When I first arrived in Los Angeles from New York City in the late 90s, a friend suggested we do some hiking in Topanga Canyon. I remember, as we drove through winding roads passing lush shrubbery and blooming wild flowers, the feeling of amazement amongst the rolling hills and breathtaking views.

After a 30-minute drive, we were transported into country living; there was no sign of city life. It was a welcome respite.

It was thrilling to see local studios in such a beautiful setting. It felt as if we were given a backstage pass. We were allowed entry into private studios, charming homes, and picturesque gardens.

The two-day annual event featured not only members of the Topanga Canyon Gallery, but also guest artists. Several of the larger studios and venues showcased multiple artists.

Artist Rebecca Catterall demonstrated her technique of transferring photo images to clay. Catterall has lived in Topanga for the past 30 years and has been participating in the tour since its inception.

“Topanga is LA’s backyard with its mountains, hiking trails, interesting cafes, and colorful history,” Catterall said. “The artists’ studio tour gives a rare glimpse into not just the art, but also the varied lifestyles of the artists who call Topanga home.”

Feeley’s furry friends were there to greet us. Her watercolor pet portraits were on display as well as her ceramic tiles.

Feeley has participated in the studio tour for eight years.

She started out as a guest artist and later moved to Topanga Canyon.

This year she will be showing mini birdhouses and new paintings.

“I find the tour is a great opportunity to clean my studio,” Feeley said. “Each year I find old art, slightly distressed art that I offer for really, really low prices!”

The silent auction and reception was another truly enjoyable part of the tour.

Here, artists gathered as well as art patrons. You could feel the camaraderie and support of the community.

The celebratory tone of the evening sent us home with a sense of awe and perhaps inspired many of us to start our own collection.

I am looking forward to getting an early start on this year’s tour as well as attending the silent auction and reception, which takes place this Saturday, June 8 from 5 pm to 8 pm.