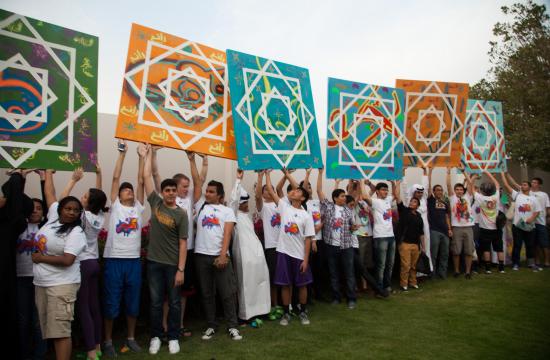 Celebrating the crossroads between American and Arab cultures, Qatar Foundation International (QFI) will host an art exhibit opening on Monday, June 24 from 6:30-8:30 p.m.

The art installation called “‘Aber: Expressions of Culture, Identity and Language” invites Angelenos to imagine a world where decades of misconceptions and stereotypes between two cultures can be broken down and re-imagined through the modern works of young people, unafraid to explore common bonds.

The opening reception is free to the public and will feature a special performance by Omar Offendum, a Syrian-American Hip Hop artist.

The high school students participated in a week-long cultural exchange in Doha, where they explored cultural identity and language.

‘Aber is an Arabic word meaning to express one’s feelings and thoughts, or to move across from one side to the other.

As the exhibit travels from Doha to Los Angeles, and then on to Portland and Washington, D.C., the juxtaposition of graffiti, photography and stencils will offer visitors that same experience of exploration and moving from one culture to another.

ALCI provides new opportunities for students to acquire basic Arabic and understand the Arab world’s history and culture, through authentic cultural experiences, activities and programs. “‘Aber: Expressions of Culture, Identity and Language” highlights the importance of Arabic language programs in U.S. schools at a time when funding for such programs is being slashed across the board.

“Along with language learning comes the opportunity to embrace and connect with another culture.  All too often, Arabic and the Arab world are not well understood,” said Maggie Mitchell Salem, Executive Director of QFI. “So our programs not only meet real community interest in expanding access to Arabic, they also ensure that students who would not otherwise have access to high-quality language programs are able to participate and experience the Arab world through an exchange like ‘Aber. For us, that’s absolutely critical.”

In 2012, the budget for the Department of Education’s Foreign Language Assistance Program was drastically reduced, forcing schools to look outside of U.S. government grants to either start new programs or to keep existing programs afloat.

According to an economic study conducted for the Business Roundtable, one in every five jobs in the United States is tied to a foreign trade.

Yet students growing up in U.S. public schools cannot take advantage of the benefits of the global economy because they are not literate in a second language.

With this in mind, cutting foreign language funding at this time is incongruous to the economy’s growth.

Arabic is the 5th most widely spoken language worldwide and is considered a critical world language by the U.S. government.

Yet less than one percent of high schools offer Arabic, despite research that shows learning a foreign language has academic, professional, cognitive and cultural benefits.

QFI bridges the funding gap by supporting new Arabic language programs in cities across the United States and South America.

To learn more about the exhibit visit www.adcbuildingbridgesartexchange.org.