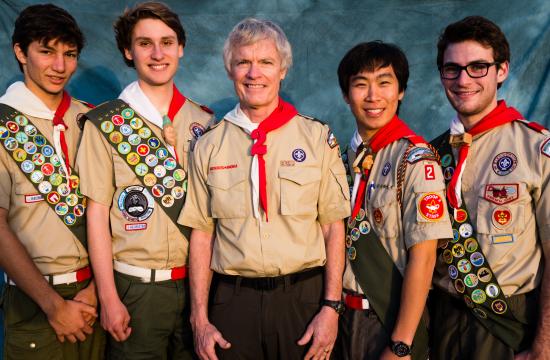 Four Santa Monica teens will be awarded the highest rank one can earn in the Boy Scouts on June 9.

Jake Alfred Erlandson, Bret K. Hart, Matthew Lawrence Hawkins, and Peter Myung-Won Pak will be honored with the rank of Eagle Scout at the Troop 2 Eagle Court of Honor to be held at Camp Josepho.

Erlandson is a senior at New Roads High School; Hart (a senior), Hawkins, and Pak (both juniors) are students at Santa Monica High School.

Only two percent of Boy Scouts achieve the rank.

Each of the scouts being honored led a major project to improve quality of life in the community. Erlandson coordinated a landscaping project at Upward Bound House, which provides housing for families in need.

Hart built storage additions for risers in the Santa Monica High School choir room. Hawkins created twenty ‘Sukkah kits’ for the congregants of the Santa Monica Synagogue (a Sukkah is a structure used to celebrate the Jewish holiday of Sukkot).

Pak built new shelves for 10th Street Preschool. Dozens of Troop 2 scouts contributed to each of these community service projects.

Troop 2 is one of the oldest and largest Boy Scout troops in the Western United States.

In its 65-year history, Troop 2 has graduated 307 Eagle Scouts and traveled to scout camps and high adventure destinations throughout the United States.

Troop 2 Scouts are known to have saved at least 56 lives.