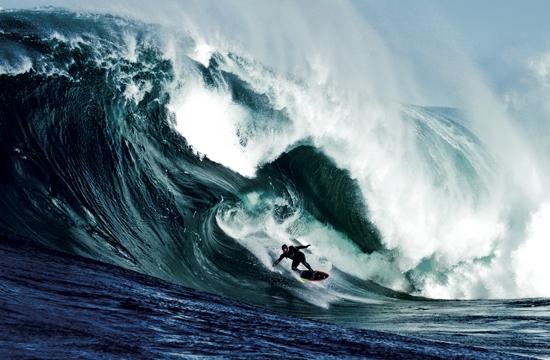 The two Australians will take part in a special evening at the Aero Theatre at 1328 Montana Avenue that is open to the public.

The evening includes the 3D screening of the feature film documentary at 7:30 pm followed by a Q&A with the pair.

Both in their 40s, these two larger-than-life ‘brothers,’ born out of the 1980s generation of prosurfing, live to ride waves the size of buildings.

Based in Sydney, they enlisted the help of surf-forecasting guru and meteorologist Ben Matson to track the giant oceanic storms that create massive swells.

The hunt took Tom, Ross, and their crew to the most exotic and remote reaches of the planet, in a race against the clock to ride and claim these monsters of the deep.

On this all-new mission they focused on winter Down Under, traveling more than 10,500 miles on seven missions over four months – determined to conquer as many giant swells as they could in Australia.

Over the course of the season, Ross and Tom were forced to come to terms with the fact their bodies don’t always keep up with their minds when making snap decisions in the face of danger, as they encountered potentially lethal waves on the south coast, in Sydney and Hawaii, where Tom surfed the infamous Pipeline with 11-time world champion, Kelly Slater.

As winter drew to a close, nature embraced Ross and Tom’s dream to surf a maiden big wave break.

A fellow big wave surfer from Western Australia reveals the location of a mythical wave 47 miles out to sea.

Named Turtle Dove Shoal, this legendary breaker has never been surfed and could possibly hold the biggest, most dangerous wave in Australia.

Speaking to The Mirror earlier this week on the roof top of Hotel Erwin in Venice, Tom said the last day of shooting at Turtle Dove was the most memorable.

“Turtle Dove was kind of a surprise visit for the production,” Tom said. “Two weeks out, we were running out of time and there were no swells on the charts. We needed another shoot and out of the blue comes our mate from Western Australian, Paul Patterson. We call him the Amp Man – he’s a little man but he knows big waves and he understands surf. He said ‘boys, I have some Cray fishing buddies in the upper north west and they say that we have to ride this wave, no one has ever ridden it.’”

Tom said the decision to pursue this lead saved the production, giving the film the climatic ending it deserved.

“The next minute we were off Geraldton and threw all of our last budget at it and had a go,” he said. “Here we were at 2 am belting through this short, ugly sea. We didn’t know where we were going with these mad cray fisherman. One of them went by the nickname Scales because he’s been out there for 30 years fishing crays. The next minute we’re out there surfing it.”

Ross said it wasn’t the biggest wave they have ever surfed, but said it was the most powerful and fastest they had ever experienced.

“These waves are traveling at a really deep water and then hitting this first spot of the continental shelf,” Ross said. “There were unbroken swells of up to 20-30 feet, which was extraordinary in itself. Try and ride a wave that moves fast. You see the board chattering, it feels like the fiberglass is going to peel off the surfboard because you are moving so fast.”

In “Storm Surfers 3D” the tone of the journey is light, but the stakes are deadly serious.

It is a film conceived to stand amongst the great surf films, but also be accessible to an audience outside of surfing, creating an overall inspiring cinematic experience.

The stunning visual and emotional journey, which embraces the universal themes of mateship, courage and ‘pursuing the dream,’ is intertwined with intimate interviews as each main character shares their story, taking the audience along on their epic adventure.