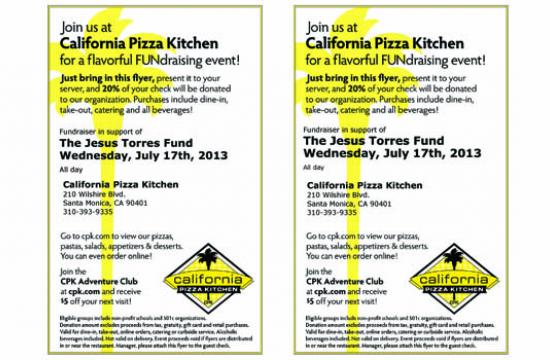 A fundraiser will be held at California Pizza Kitchen in Santa Monica this Wednesday, July 17 to help assist a Santa Monica resident with medical costs following a swimming accident last month.

CPK at 210 Wilshire Boulevard is lending its support and will donate 20 percent from every check on Wednesday July 17, 2013.

The flyer pictured above must be presented at the time of purchase to support the cause, which will run all day.

On June 20, Jesus Antonio Torres was involved in a swimming accident at Santa Monica Beach.

He has been in the Santa Monica/UCLA Hospital ICU since the accident and has a long road to recovery. His long-term prognosis is still unknown at this time.

Jesus grew up in the City of Santa Monica and is the second born of four children to the Torres family.

He attended schools within the Santa Monica Unified School District and excelled academically.

He quickly became a valuable member of the Santa Monica Community, which was evident in his participation in various civic groups.

During his four years at PAL, Jesus served on the Youth Leadership Council (YLC) and was President for two years.

Jesus was also given the opportunity to represent PAL by speaking at a Santa Monica City Council meeting.

He was involved in many activities which included running four Los Angeles Marathons with PAL’s running program, tutoring younger members in the Homework Assistance program, and giving tours of the PAL Youth Center to SMPD Citizen’s Academy in Spanish and English.

Jesus was also an active member of the Santa Monica Police Department Explorer Post where he attained the rank of Corporal.

He was a member of the SMPD Explorer Post for the maximum allowable time of seven years.

He continued to demonstrate his leadership skills by mentoring new recruits into the program.

Jesus was an excellent role model to all who joined the SMPD Explorer program.

In 2009, Jesus graduated from Santa Monica High School. He was accepted to many universities, including the prestigious Harvard University, but chose University of California Santa Cruz.

He attended UCSC where he double majored in Anthropology and Psychology.

Just six days prior to his accident, Jesus became the first in his family to graduate from college.

Jesus never forgot about his Santa Monica Community during his time away at UCSC.

During his school breaks, Jesus continued to volunteer and participate in PAL and SMPD Explorer activities.

Jesus has touched the lives of all those around him, including those that mentored him. He represents a vital component to any organization, community or family.

Anyone who wants to contribute directly to the fund, checks can be made payable to: