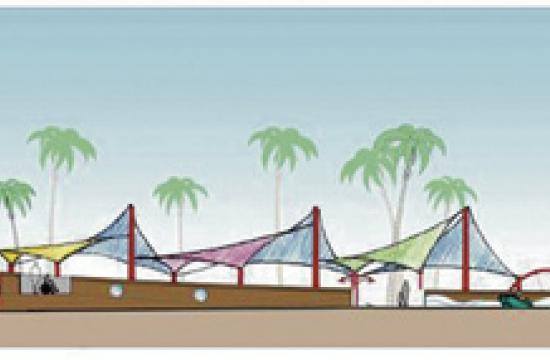 Have you seen the blue shade “sails” at the southern end of Santa Monica Beach and wondered what was happening? What you are looking at is the shade structure for South Beach Park, a playground specifically designed to be universally accessible to children of all physical ability levels.

The park will open this Saturday, July 13. A grand opening celebration, which is open to the public, will be held at 10 am near the 2900 block of Ocean Front Walk.

The Santa Monica Disabilities Commission began a serious push to promote the idea of a universally accessible playground five years ago. They partnered with the City’s Recreation and Parks Commission, received City go-ahead, grant money was found, and the location determined.

Katie Spitz, head of the firm KSA, was chosen to be the landscape architect for South Beach Park.

“The idea of being able to work on the design of a universally accessible park has great meaning,” Spitz said.

The concept for universally accessible parks is not new.

In Los Angeles 15 parks are identified as universally accessible.

One of the LA universally accessible parks, 4th Ave. Park, was designed by Spitz and her team.

“We need to consider providing play experiences for children at all ability levels and to create opportunities for the social interaction that is a key element of play,” she said.

“We chose the theme of the boat because we could imagine children running and climbing in the boat but what is really fun is that they will bring their own inventiveness to their play on the boat. We made sure that all children, even children in wheelchairs, could get to the prow of the boat and pretend to be the captain of the ship.”

The images used by the design team came from historic precedents.

The shade sails are reminiscent of those at Pacific Ocean Park, the amusement park that used to be at the south end of Santa Monica Beach.

The boat is the focal park image. The park builds on the ocean theme with sand and water play and marine images.

Located just north of the border between Venice and Santa Monica, the blue sails and the surrounding palm trees of South Beach Park are designed to mark the entrance to Santa Monica. The image is one of fun and playfulness, of being at the beach.

Previously the 20,000 sq. ft. area had several picnic tables set in grass and a small sand play area. The existing palm trees will be incorporated into the design of the new playground.

Design work to help shape the park started in 2011 with the design team and city staff meeting with members of the Santa Monica/Malibu Unified School District PTA Special Education Committee, members of The Growing Place preschool, and residents of Sea Colony.

Public meetings on the design of the park were also held at Virginia Avenue Park and at Recreation and Parks Commission meetings.

Mostly, the meetings focused on thematic design and the choice of play equipment.

In addition to their interest in the design of the park, residents at Sea Colony were also concerned about issues of safety and traffic.

In response to their concerns the City will close the playground at night, add additional plant material along the fence, post signage saying “adults allowed only when accompanied by children,” add new signage and striping on the bike path, and a new crosswalk across the bike path.

Like all Santa Monica Parks, sustainability is a mandated goal.

The sustainable planting palette for South Beach Park includes lily-of-the-valley, quail bush, fortnight lily, wild lilac, white rosemary and trailing lantana. A fence that is 42” high will surround the park. A new path across the sand is also planned.

In designing the park KSA research helped to determine play activities that would be accessible, challenging and encourage independence.

Play equipment in the park is designed to meet specific needs of all children and to ensure that children at all ability levels can participate.

Parks are great places to have fun, to swing and climb and run. A park is a place where all you have to bring is your imagination.

I’m ready for this park and I’m ready to imagine the beach parking lots becoming green parks in the future. Imagine the green of parks and playing fields next to the warm tan colors of the sand and the blues of the ocean. What an image that would be for Santa Monica.