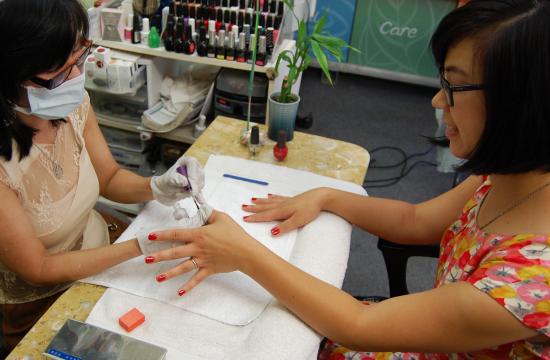 Pedicures and sustainability do not appear to have much in common, short of two people perhaps having a weighty conversation about the environment while getting their respective nails done at a local salon. Leave it to Santa Monica’s civic and business leaders to somehow tie the two issues together.

Mayor Pam O’Connor attended the kick off event Tuesday morning. The program is a collaboration between the California Healthy Nail Salon Collaborative and the Office of Sustainability and the Environment.

“Santa Monica is excited to launch a Healthy Nail Salon Program— recognizing nail salons in our city that use healthier products and maintain healthy indoor air quality,” Mayor pro tem Terry O’Day stated. “Conscious consumers will be able to find the services they want, salon workers will breathe easier and fewer toxics will enter our environment.”

The reason for the Healthy Nail Salon Program: the everyday use of toluene, dibutyl phthalate, and formaldehyde.

According to City staff, nail technicians are regularly exposed to harmful and toxic chemicals for a prolonged period of time. Toluene, dibutyl phthalate, and formaldehyde are known as the “Toxic Trio,” City staff said, and can cause cancer, birth defects, and miscarriages.

Among the requirements: avoid polishes containing the Toxic trio; require all technicians to use nitrile gloves; improve ventilation within the salon; and, ensure technicians are kept abreast of all health and safety information.

Those interested in participating in the Healthy Nail Salon Program may be provided with free support and trainings.

According to City staff, nail salons joining the program “will receive official recognition and free promotion by the City of Santa Monica.”

“This program is a win-win for all of us. The Santa Monica Healthy Nail Salon recognition program will create healthier and safer workplace environments for both workers and consumers who visit Santa Monica’s nail salons, and for salons, will help bring more customers to patronize their businesses,” Karl Bruskotter of Office of Sustainability and the Environment stated.