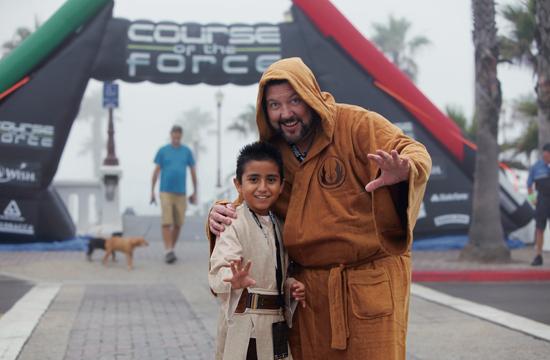 The second annual Course of the Force relay will bring Star Wars and Comic-Con enthusiasts to Santa Monica this Friday, July 12 as part of an Olympic style torch-relay involving a lightsaber.

The event starts Tuesday in Northern California and will conclude July 16 in San Diego – two days before the start of Comic-Con International.

Relay participants will be decked out in Star Wars themed running gear throughout the eight-day relay.

Peter Levin, CEO of Nerdist Industries and Course of the Force creator, said the impetus behind the development of the race was simple.

“I was at the 18th Comic-Con and I wanted a way to expand the Comic-Con experience,” Levin said. “For me the exercise was how can I prolong this experience, and I thought what better way to achieve this than through a lightsaber relay in partnership with Lucasfilm.”

Lucasfilm, founded by filmmaker George Lucas, is the production company responsible for the Star Wars films. Lucasfilm has been in partnership with Course of the Force since the race was first held in 2012.

This year the race will begin in Marin County at Skywalker Ranch.

The official Course of the Force lightsaber will be brought from its spiritual origins at George Lucas’ Skywalker Ranch.

Runners will travel south across landmarks such as the Golden Gate Bridge as it heads towards Santa Monica, then finally ending in San Diego.

The relay portion on July 12 will begin at Sunset and the Pacific Coast Highway at 1 pm; organizers will be at the Santa Monica Pier from noon to 6 pm for it “Con-ival” featuring games and giveaways. A concert at the pier will start at 4:30 pm.

Last year’s race began in Santa Monica, but after being a huge success, Lucasfilm invited the relay to begin at Skywalker Ranch.

As a native of Santa Monica, Levin said he had a lot of pride running the relay through Santa Monica.

Levin said the relay was not only a way to celebrate Star Wars and Comic-Con, but it also raises money for an important non-profit organization.

“The goal of the race is to promote Star Wars and at the same time raise funds for Make-A-Wish Foundation,” Levin said. “One hundred percent of the registration proceeds are donated to this Foundation.”

Levin said it made sense to select a child-focused charity as the concept of a lightsaber relay was a child friendly concept.

“We always wanted to tie it to a child focused charity and Lucasfilm already had a good existing relationship with this particular foundation, so it made all the sense in the world to choose Make-A-Wish,” Levin said.

Levin said he hoped this year’s relay would generate even more money.

“Both money and awareness are important for Make-A-Wish, so we are hoping to raise a bit more,” he said.

Chris Hardwick, founder of Nerdist Industries and host/correspondent for the 2013 relay, recently announced this year’s Course of the Force race on “Late Night With Jimmy Fallon,” further spreading the word of the event.

“The response has been tremendous,” Levin said. “There is so much noise at the Comic-Con, so it’s exciting that we have the opportunity to own the airways leading up to it.”

Levin said the race attracts participants with an amazing level of commitment.

In addition to attracting participants aged in their 20s and 30s, the race also welcomes a lot of families.

“The race primarily attracts families with kids old enough to appreciate Star Wars as a property,” Levin said. “I look at it as a generational event, as fathers and mothers turn over their passion for this property to sons and daughters.”