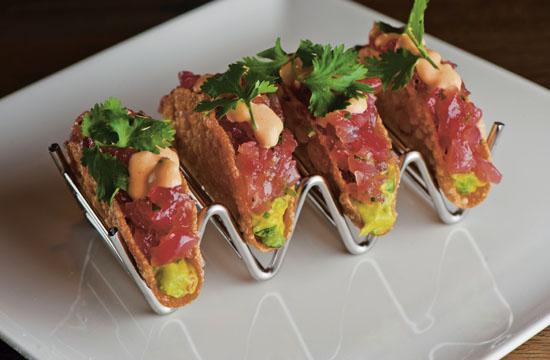 Del Frisco’s Grille, which offers an innovative twist on American comfort cuisine along with local fare, opened Friday opposite the Santa Monica Pier on the northeast corner of Ocean Avenue and Colorado.

Although this is the seventh Del Frisco’s Grille to open nationwide – with locations in Manhattan, Atlanta, Houston, Dallas, Phoenix, and Washington D.C. – the restaurant is uniquely catered to accommodate California cuisine.

Executive Chef Daniel Tiger explains that in addition to Del Frisco’s signature dishes, the inspiration for the menu was a California driven cuisine.

“Our menu is by far the most diverse, utilizing what we have access to at the local marketplace,” Tiger said. “Our menu is partially geared towards a vegetarian or beach vibe, featuring lighter fare items such as our Seared Tuna Salad.”

The menu seeks to strike a balance between dishes that are offered at the restaurant’s other locations combined with a unique California inspiration.

Some of Del Frisco’s signature dishes include Cheesesteak Eggrolls, Ahi Tuna Tacos, and the

A new salad to the California location, the Kale and Brussels Sprout Salad, although not a signature dish yet, will soon be one.

“My sous chefs and I will push for hitting the market twice a week to utilize fresh seasonal produce,” Tiger said. “Whether you know the menu or not, we will have plenty of items to offer customers based on what’s local and fresh.”

Tiger said there is an openness with California cuisine and Santa Monica culture which will allow the restaurant to broaden its menu.

Tiger is looking forward to being able to alter the menu based on what’s local and fresh.

More than 300 wines carefully selected by David O’ Day, wine director for Del Frisco’s and Adem Sash, sommelier for the Santa Monica location, include wines by the glass, carafe, and bottle.

Guests can enjoy an extensive selection of California wines and varietals from around the world.

With an enviable location, Del Frisco’s boasts views of the Santa Monica Pier.

“By nature of our location, we know we will attract tourists, locals, and business people,” Tiger said.

Tiger said that Del Frisco’s is not catering to any one demographic, but rather they hope to welcome a large range of customers.

“Del Frisco’s is about breaking down walls of pretentiousness that accompany some restaurants,” he said.

After working at a small Orange County café, he honed his culinary skills working in various kitchens across Southern California.

In 2008, Tiger went to Seattle and joined the Del Frisco’s Grille team working in Sullivan’s, a Del Frisco sister restaurant.

In 2011, Tiger ventured to Boston where he served as a sous chef for Del Frisco’s Double Eagle Steakhouse.

It was in Boston that Tiger was asked to be the executive chef for Del Frisco’s in Santa Monica.

Tiger believes that Del Frisco’s energy is what keeps people coming back.

“The energy and the hospitality are what makes Del Frisco’s unique,” he said, “Most people can serve great food, but what brings people back is hospitality and a beautiful atmosphere.”