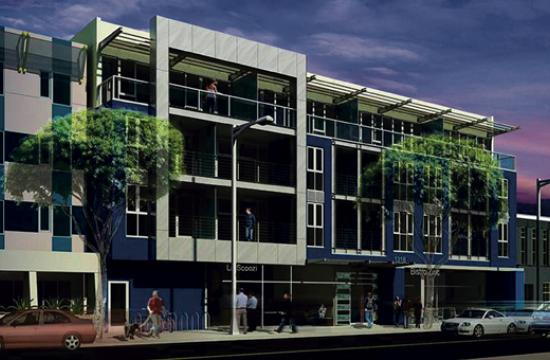 Six weeks ago, Council members narrowly approved a proposed development bringing a 53-unit project to Santa Monica (rendering pictured right). The development agreement (DA) came back to the dais for a second reading June 25 and was approved 6 to 1, but not before Council members had a discussion about public process – or the lack thereof.

After Council members voted 4 to 3 on May 14 in favor of a proposed 53-unit development in downtown Santa Monica, the project’s developer – Century West Partners – submitted a letter to Council members and City Hall.

That letter, according to Council member Kevin McKeown, outlined a few modifications the developer was willing to commit to after the first reading vote.

For example, based upon a discussion among Council members during their June 25 meeting, the developer was apparently willing to make concessions on outdoor space and affordable housing.

When the DA was up for its second reading, McKeown had attempted to read the content of the letter. However, he was not allowed to, as no new material may be considered during second reading.

According to City Attorney Marsha Jones Moutrie, Council members are only allowed to vote on an item “as is” during second reading.

Moutrie added the developer’s letter was public record and made available to be viewed by community members during the meeting. However, the modifications raised in its letter could not be discussed on the dais, as it was not “agendized” nor was there proper public notice.

Council members and City staff then engaged in a conversation of proper procedure, trying to determine how to deal with such issues in the future. Also discussed was the difference between minor modifications and amendments.

“It’s only because I asked a question that the public even has an announcement … that there is such a letter to express intent to amend this development agreement, after the fact, through minor modifications at the staff level,” McKeown said. “If that’s the case, then the public process on this is so flawed I don’t believe we should be voting for this project based upon a contingent letter.”

According to City staff, the process for minor modifications is to have the Planning Commission consider the issue first and have them make a recommendation to the city council.

Council member Ted Winterer wanted to ask City staff how they intended to respond to the letter, but, consistent with the point Moutrie made, was not allowed to do so.

“This is madness. I don’t think this is the right way to deal with this process. We may have been offered a better package,” McKeown said. “We have a lot of development agreements coming up before the city council. I think it really would be better if we handled them more transparently.”

After the second reading vote was recorded, Mayor Pro Tem Terry O’Day proposed a direction to staff to steer away from proscribing “onerous” language of what developers must commit to and instead allow for more flexibility in the language. For example, instead of requiring a developer to provide 10 solar panels, perhaps the developer would be required to provide “at least” 10 solar panels.

“We’re just becoming so specific in some of the terms that we’re requesting from these applicants that we may be doing ourselves an injustice if we don’t set it as a threshold as opposed to something exact,” O’Day said.

The direction was unanimously approved.

Located at 1318 Second Street, the DA proposes a four-story structure with 53 units, including 28 studios, 19 one-bedrooms, and six two-bedrooms. The building would be 45 feet high and 15,000 square feet. Ground floor commercial space would take up 6,664 square feet. There would also be a two-level subterranean parking garage with 66 parking spaces.

When the DA was voted upon in May, all seven Council members were pleased with the proposed project overall, but at least three of them wanted a little more time to negotiate community benefits with respect to affordable housing and solar panels.