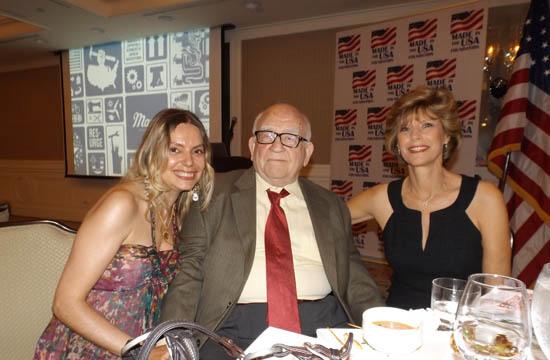 Emmy award winning actor and noted activist Ed Asner, along with American manufacturing executives and guests, attended the 2013 Made in the USA Hall of Fame Awards Dinner at Shutters on the Beach in Santa Monica on Tuesday night.

There was also a silent auction featuring American-made products.

All were lauded not only for their innovation, but their invaluable creation of American jobs.

Joel D. Joseph explained why he co-founded Made in the USA.

“I believed if we lost our manufacturing base in the United States that we were doomed as a nation,” Joseph said.

His major accomplishments thus far have been the “The American Automobile Labeling Act” and the “Country of Origin Labeling Act” – so you can thank him for knowing where your car was made, or where your bananas came from.

Ed Asner, a tireless supporter of charities, arrived fresh from a June 29 performance in Kansas City, Kansas of his one man-show “F.D.R.” which benefited the United Way.

He was happy to drop in and help emcee the awards, noting, “From the bottom of my heart I totally support the idea of ‘Made in America’. They wouldn’t have the unemployment problem that we have now, if we could have followed his (Joel D. Joseph’s, and we imagine F.D.R.’s) principles, seeing that our people are being taken care of. Not enough people are being taken care of by American trade policies.”

He noted that owners of large companies choose to close American plants, while still earning profits from plants overseas.

He suggested a solution: “Make sure the owners are paid the ultimate high cost for what they’re making overseas,” in other words, not taking advantage of workers there. “There is no sense to producing overseas unless you have safeguards for the workers there, and their standard of living is included – and most of the time it’s not.”

Also attending was TV Producer/Filmmaker and Santa Monica resident Rachael Joy, who was busy filming her documentary about the resurgence of “Made in the USA.”

“Part of that,” she explained, “is that since January 1st I have been purchasing only products made in the USA, and my goal is to do that for a year.”

This has not been such an easy task, she noted: “As you know in Santa Monica we love to ride our bicycles. My bike tire went flat recently. Guess what? Bicycle inner tubes: not made in the USA. So that’s like a whole summer of not riding my bike.” And “No women’s shoes!” Thankfully, after much “racing around” she found a dress for the evening’s event in a little shop on Montana Avenue.

While the above, and ample good humor during the ceremony lent levity to the evening (special mention to honoree American Apparel’s representative for the joke about the two ants worrying about the golfer continually swinging into their ant hill instead of his target: “If we’re going to survive, we better stay on the ball!”), the focus of the evening was to revive an economy and a manufacturing base which has lost much ground over the years, thanks to cheap, and sometimes even slave labor overseas.

In one somber moment, founder Joel Joseph recounted the story of a note found in a Halloween decoration.

It was from a slave laborer in China, who wrote, ‘People who work here have to work 15 hours a day without Saturday, Sunday break and any holidays. Otherwise they will suffer torturement (sic).’

Actress and Producer Marie Paquim, a survivor of slavery, also attended, and had the chance to exchange views with Joel D. Joseph, and was included in Rachel Joy’s documentary footage that evening.

“If the manufacturers come back to the United States, and if we support small businesses, that’s one way to prevent human trafficking,” Paquim said. “Last year the profits of human trafficking were $32 billion. Obviously someone is making the money, but who? It’s in the wrong hands. Being made in the U.S.A. – it prevents manufacturers to take advantage of labor. It will guarantee jobs and the growing of the economy.”

The good news is that after years of public pressure from Made in The USA and others, both Apple Corporation and Motorola will be opening a plants again in the US.