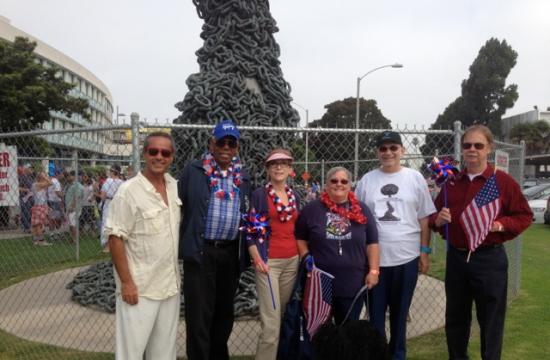 They included Michael Feinstein, Nat Trives, Ruth Goldway, Judy Abdo, Paul Rosenstein, Dennis Zane. James Conn not able to be at the parade, but was there in spirit as the seventh former mayor throwing his support behind the sculpture.

In March, the former mayors wrote an open letter explaining why the sculpture should be saved:

As Mayors, we have always taken pride in Santa Monica’s commitment to art, landmarks, and peace. “Chain Reaction” was a monumental and generous gift to our great City. The late three-time Pulitzer Prize winning editorial cartoonist Paul Conrad, who designed and created the 26-foot-tall sculpture, would be pleased that so many people are working so diligently on making sure the restoration of “Chain Reaction” becomes a reality.

Conrad’s unique and creative design depicting a nuclear mushroom cloud made of large chain links has a timely message he inscribed at the sculpture base: “This is a statement of peace. May it never become an epitaph.”

We, as former Mayors, strongly urge everyone to support the Conrad family and community efforts to help raise the funds the City says is needed for the restoration effort. Whether your tax-deductable donation is smaller, mid range, or a very large donation by a concerned individual or foundation “angel”, it will be deeply appreciated.

Paul Conrad gifted the sculpture to the City of Santa Monica through a $250,000 philanthropic peace donation by an anonymous benefactor. It has been standing in the Santa Monica Civic Center since 1991 as a warning of the dangers of nuclear escalation.