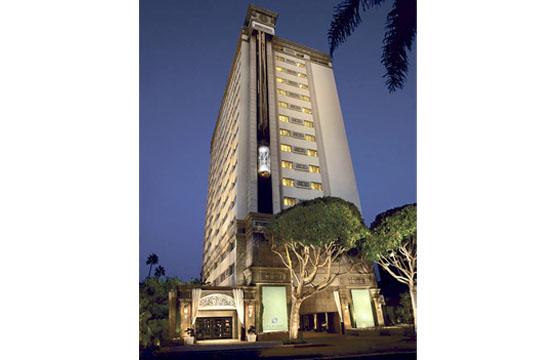 If the Hatsfields and McCoys lived in Santa Monica in 2013, one family would be residing in the Fairmont Miramar while the other might take up residence in the Huntley Hotel. Since it announced plans to renovate and expand its resort campus, the Fairmont has been engaged in feud-like relations with its neighbor, The Huntley.

The back-and-forth between Santa Monica’s two largest hotel operators escalated Tuesday morning, when lawyers for the Huntley Hotel issued a demand letter to Miramar owner Alan Epstein, asking him and his representatives to “cease the defamatory smear campaign against the Huntley … (and its) president and general manager, Mr. Sohrab Sassounian.”

Attorney Rick Zbur of Latham & Watkins penned the letter, which was dated July 16, 2013. A copy of the letter was issued to members of the Santa Monica’s City Council, Planning Commission, and City staff.

The formal letter was issued in response to the creation of a website and issuance of two flyers by Ocean Avenue LLC – the group who owns the Miramar – alleging the Huntley Hotel engaged in “questionable political practices” and a smear campaign to prevent the Miramar’s planned renovation and expansion.

“The Miramar’s personal and false attacks are clearly aimed at stopping the Huntley’s participation in the public discussion about the future of Santa Monica and the Miramar’s proposed massive expansion,” Shiva Aghaipour, vice president of the Huntley Hotel, said in an email to The Mirror. “The flyers and website that we are demanding be retracted and taken down do nothing to advance understanding or deliberation about development issues. Instead they focus on false accusations and personal attacks. This type of blatant attempt to prevent participation in a city-led public process is outrageous and must be stopped.”

In his letter, Zbur said the statements on the website – www.huntleyfacts.com – and the flyers were not only false but also part of a “smear campaign” to “intimidate” the Huntley Hotel.

“We believe the purpose of the smear campaign directed at the Huntley and Mr. Sassounian is to intimidate the Huntley from continuing its legitimate participation in the Miramar project public process,” Zbur wrote. “The false statements that Mr. Sassounian is greedy and the suggestion that the Huntley’s opposition to the project is based on greed are entirely false.”

Zbur continued while the letter does not “attempt to restrict legitimate free speech,” his firm would take additional steps if Ocean Avenue LLC and others affiliated with the Miramar did not refrain from engaging in “damaging communications and activities.”

The letter also demanded the website (www.huntleyfacts.com) be taken down by July 23 and that all defamatory, false, and negative statements directed at the Huntley Hotel or Sassounian immediately cease.

In an email sent to The Mirror Wednesday afternoon, Epstein kept his statement short and sweet by maintaining the flyers were “factual.”

“We stand behind every factual statement in our flyers, and look forward to the opportunity to respond point by point to Mr. Zbur’s letter,” Epstein stated.

Two flyers were posted around Santa Monica in June.

The first flyer, distributed to various locations across Santa Monica, included an image of the Huntley Hotel’s owner, Sohrab Sassounian. Above the image read: “Who is Sohrab Sassounian and why is he spending millions to smear the Miramar?”

The other side of the flyer read: “Next time you see misinformation about the Miramar, consider who is bankrolling it,” and, “Judge the Miramar Plan on its merits.”

A second flyer was distributed two weeks later and accused the Huntley of standing in the way of $20 million of revenue for Santa Monica by opposing new development in the City’s downtown core. The Huntley’s alleged stance, according to the flyer, could result in Santa Monica losing funding for affordable housing programs, fire fighting, and law enforcement.