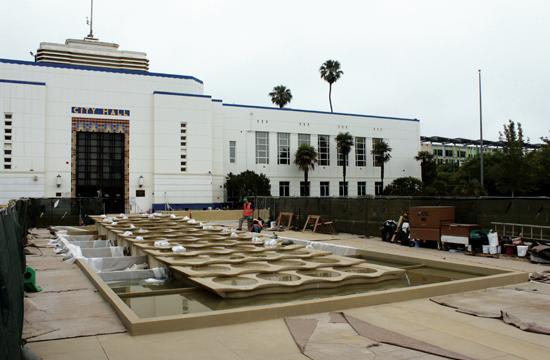 Santa Monica resident David Garden has walked past the front of City Hall every other day for the past year with a watchful eye on the construction of Ken Genser Square. A couple of months ago, he noticed there were some serious leakage problems with the new multi-tiered fountain project in front of City Hall.

As each week passed, he noticed that the contractor had been attempting numerous techniques to stem the leaks from the pre-cast top sections, which even this week, still trickle down the supporting wall structures.

“It appears that there might be a serious design flaw in the fountain or a serious mistake in the construction assembly process,” Garden said. “Since this is a signature piece of the James Corner park design, I am wondering how these problems are affecting the opening timeline for the entire park?”

Santa Monica Director of Public Works Martin Pastucha told The Mirror the fountain has a “complicated” and “unusual” design, but not a “bad design.”

“This is a unique water feature and with anything unique sometimes there may be adjustments to construction techniques and operation,” Pastucha said. “We are using a Design Build system of construction; the designer and builder are collaborating to complete this project element appropriately per the construction contract.”

Pastucha said the leakage problem would not affect the full opening of the park, which is scheduled for completion in September.

“The water feature was always scheduled to be one of the last components completed as this is a more complex construction than the planting and pouring of concrete,” Pastucha said. “There are not any construction overages on this project. Based on the expenditures to date the project is tracking to come in less than the budget.”

Pastucha said the designers and the builders are working on a number of ideas such as sealents and/or adding additional pieces to fix the problem.

“They have the responsibility to deliver to the city a product that is fully functioning and free of defects,” he said. “The City will not accept a component that does not meet those requirements. In addition, there is a one-year warranty on the construction of the park and water feature by the builder and they are obligated to repair items that are not functioning as designed.”

“If an item is not working as required the contractor has the responsibility to fix the defect until the end of the warranty period,” he said. “This is a very unique project and the citizens of Santa Monica will enjoy it for years to come.”

Construction of Ken Genser Square, which was previously called Town Square, started in early September 2012. Along with the center streaming water fountain, the one-acre park will feature pedestrian-friendly pathways – some are already open.

On the other side of Main Street, Tongva Park (previously called Palisades Garden Walk) is also under construction. This six-acre park is bound by Main Street, Olympic Drive, and Ocean Avenue. It is also scheduled to open in September.

The price tag for both projects collectively is $46.1 million.