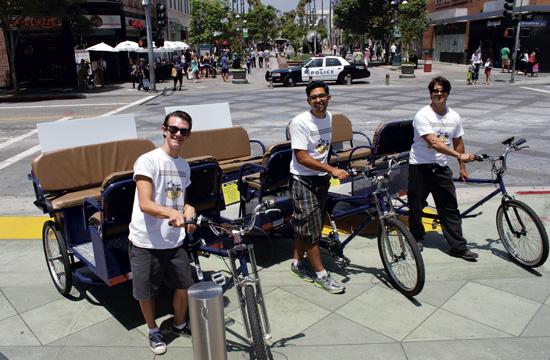 The newly launched service provides tourists and residents in downtown Santa Monica with an alternative to contending with local traffic.

The Santa Monica City Council unanimously approved an ordinance in April to allow pedicabs to operate in most of Santa Monica.

Prats said he discovered his passion for bikes after founding adoptabikela.com, which specializes in restoring vintage road bikes.

“I got involved in biking and I loved it,” Prats said. “I started LA Bike Taxi after looking for my next venture to get into. I love Santa Monica and I was motivated to come to Santa Monica first and start this service safely and effectively.”

Although only currently operating within Santa Monica city limits, Prats hoped to expand to other areas of Los Angeles.

“Hollywood and Downtown LA are congested and need a better way for people to get around, so we hope to expand to these areas,” he said.

LA Bike Taxi will soon introduce the ability to track pedicab drivers through the company’s website. The “locate bike taxi” tab on the site will open an app which will lead people to bike taxi locations.

Since beginning service last Thursday, its drivers are still figuring out ways to target certain people.

“We are currently focusing on well-populated areas and then we will work on ways to target more locals and make it part of their routine,” Prats said.

The pedicabs, which LA Bike Taxi owns and then leases to drivers, can safely accommodate up to five people.

“Five people is our limit, and this might include three adults and two children,” Prats said.

LA Bike Taxi is currently looking to hire new drivers. The company’s drivers must be aged 18 or older and have a valid driver’s license with a clean driving record. Additionally, drivers must be able to pull 500 to 800 pounds for six to eight hours a day.

As a new company, the price of a ride is negotiable.

“Since we are new we ask the customer if they think our price is fair,” Prats said. “A lot of times they agree with the set price, which is currently $2 per block per person.”

Prats said this price may be subject to change, however, as he is considering lowering the price to $1 per block per person.

Aside from offering an alternative to driving, LA Bike Taxi’s mission is to help reduce the high emissions that accompany the transportation system.

LA Bike Taxi is also part of the “1% for the Planet” movement.

“The 1% for the Planet movement is a certification for donating at least one percent of our earnings to charity,” Prats said.

Through their 1% for the Planet membership, the company will donate a certain amount of money to non-profit environmental group Heal the Bay, which is committed to protecting beaches, oceans, and rivers.

When choosing to take a ride with LA Bike Taxi, Prats said customers not only get to experience scenic Santa Monica, but they also get to contribute to a worthy foundation.