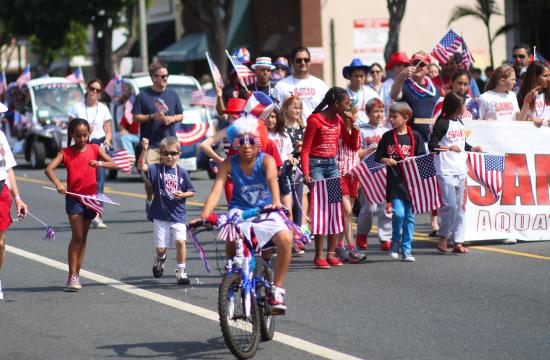 For the seventh year in a row, the Santa Monica community came together for the Ocean Park Association’s highly successful 4th of July Parade along Main Street.

The parade, which this year had the theme heroes, began at 9:30 am outside the Civic Auditorium.

It proceeded south down a closed off Main Street before turning west on Marine before ending on Barnard Way near the end of Ocean Park Boulevard.

“I am fiercely proud to represent today’s heroes, the men and women of the Santa Monica Police Department,” Seabrooks said. “I am privileged to be able to celebrate our heroes past and present not only as our parade’s Grand Marshal but also as this community’s Police Chief and I’m loving it.”

Keeping the faith with sustainability all dignitaries rode in electric cars. However, vintage cars were once again the exception to the green rule. And the low riders were back again this year too.

Music came from the Samohi Marching Band, The Mariachi Conservatory, the Santa Monica Youth Symphony, the Americans, the FU Dogs and more.

Bike groups Bike Attack and the Freedom Riders and lots of neighborhood kids decorated bikes for the parade.

Local groups the Running of the Grunion and the Euclideans as well as local schools SMASH, the Edison Language Academy, the Growing Place, and Mount Olive Preschool also strutted their stuff.

Happy 4th of July to all!