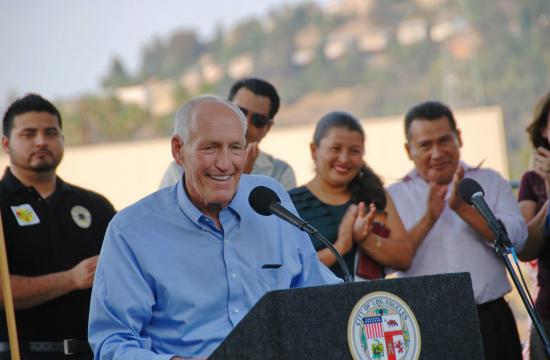 The public forum will take place from 7 pm (until 9 pm) at the Santa Monica Friends Meeting Hall located at 1440 Harvard Street, Santa Monica .

Prior to his election, Rosendahl was an educator and award-winning television broadcaster with a long record as a leader in Los Angeles civic affairs. He was the first openly gay man elected to the Los Angeles City Council.

He chaired the California Commission on Tax Policy in the New Economy, served as president of the Los Angeles Press Club, as chairman of the Cable and Telecommunication Association and was a member of the education fund of the Los Angeles League of Women Voters. He also was a regular moderator of many community forums.

Prior to his cable TV career, Rosendahl was a White House appointee to the State Department as Chief of Operations for the U.S. Trade and Development Program, served as an associate in philanthropic work for John D. Rockefeller,III and worked on many political campaigns including Robert Kennedy’s 1968 presidential bid.

A Vietnam – era veteran, Rosendahl served in the U.S. Army from 1969 to 1971, spending a year as a psychiatric social worker, counseling troops returning from combat.

The Activist Support Circle is an ongoing open support group for progressive activists that started in February, 2005 as a way to help guard against activist burnout.

The forum is free and free on-site parking is available.