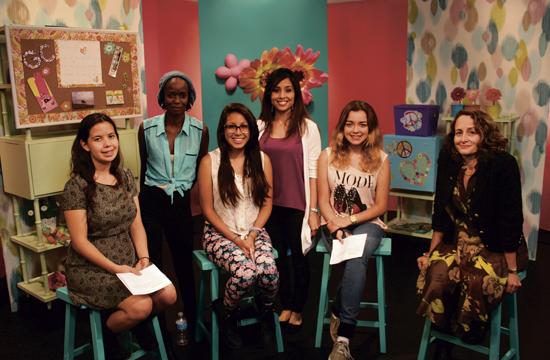 Behind a discreet orange door on 19th Street in the Mid City neighborhood is the City of Santa Monica’s new CityTV studio, which produces more than 80 half-hour shows each 10-week season on Channel 16.

This season, which ran March through June, included 13 series covering a wide range of interests.

City Cable TV manager Robin Gee said the facility, which opened about a year ago, is a dream come true.

“I’ve been with the City for over 18 years and we started out in a trailer in the back parking lot behind City Hall,” Gee said. “To be in a real production facility after all this time is really fantastic.”

Gee said CityTV was previously housed at 1717 4th Street and before that, at 525 Broadway.

“Your dream is to have a professional television operation with a studio, lights, special sound proofing, and all that kind of stuff that you really need for a full blown, professional operation,” she said. “We spent a lot of the past year to acquire and install our equipment. We did our first season here using equipment from Santa Monica College. They had what they call ‘studio in a box.’ We did 80 to 90 shows back in the spring a year ago. We launched this spring with our own equipment.”

“We were able to fund the construction and remodeling of this facility with this one fund, which was about $2 million,” she said. “To buy this building, we were able to use what’s called the one percent PEG fee. PEG means Public Educational Government access. It’s a fee that is on cable television bills and it’s dedicated to capital costs only to support local community channels like ours. Pretty much the entire building was built and constructed using non General Fund monies, using funds that were intended for this type of focus.”

Beyond that, the CityTV division also has a mobile production truck that can be seen at the upcoming Twilight Concert Series and at SMMUSD School Board meetings.

CityTV also has a master control room at City Hall that airs the City Council, Planning Commission, and Rent Control Board meetings live from Council Chambers.

Back at the 19th Street headquarters, CityTV produces two seasons a year – a fall season and a spring season that coincides with the Santa Monica College semester system.

Gee said a partnership with SMC helps through extra resources and crew needed to create the shows.

“It’s a pretty ambitious schedule, but it’s trying to use the resource very efficiently, maximize community partnerships, and create a whole bunch of relevant, local programming,” Gee said. “Since we don’t have the benefit of huge budgets to make million dollar shows here at CityTV, we know that our competitive edge is showing our own local community. We’re trying to create good partnerships, leverage them, create relevant local programming, and eventually get a little more sophisticated about our marketing and promotion by utilizing social media and the power of these organizations that we are partnering with to build our audience.”

Gee has five full time permanent CityTV staff as well as a handful of part-time staff and freelance producers and directors.

“When we got the new studio, it was a whole new operation for us,” Gee said. “We didn’t necessarily get an increase in budget to increase our production capabilities thanks to having this studio. What we did was create a partnership with Santa Monica College.”

Gee said SMC has a studio video production class where all students have to put in 30 hours in order to pass the class.

“They are our crew for all of our productions,” Gee said. “Then we added to that a community volunteer program so that high school students, seniors, people who work in the industry who either want to gain production skills or upgrade their production skills can get hands on experience. We have seniors who do guest relations and welcome the guests for the shows and invite them for a coffee and help take their clothes and hang them on the racks, to the students who are learning hands-on video production skills.”

Gee said the key to the division’s success was to provide relevant information to the community and to provide results for the services, people, organizations, and events that they cover.

“So far we have an excellent history of producing not only quality programming – we’ve won 12 Emmy Awards and we are recognized for the quality of programming we produce – the real test and the real reward is to get a response from the community,” she said. “Our response is that people are getting more involved, not buying more Coca Cola, but being more engaged in the community.”

One of the 13 shows aired this past season was the YWCA Santa Monica Westside’s “Girl Central” show that featured middle school and high school girls as its hosts and covered topics of interest to teens.

The last taping was on June 4 where the special guest was Nina Jacobson who produced the “Hunger Games” and “Diary of a Wimpy Kid” movies.

Jacobson said her mom had been actively involved in helping produce the YWCA’s show on CityTV.

“She’s very invested in these girls and so she thought that as girls supporting girls they would like to have an opportunity to talk to someone who does what I do,” Jacobson said. “I think they are maybe interested in hearing what a producer does, how you make decisions in the job, and how you find material and how you pick somebody to star in a movie and pose questions that you don’t usually get to ask.”

Jacobson said the YWCA collaboration with CityTV was a great concept to build the confidence in the participants.

“It’s a great way for these girls to build a skill set that will always be with them,” she said. “I got my start from a woman who extended a helping hand to me. I always try to do that for other people because it’s a little bit of a mysterious field and it’s hard to know how people end up doing it behind the scenes.”

Veronica Sabbaghi, who is the YWCA Santa Monica Westside’s director of Youth Development, said she was thrilled to have completed their first season of “Girl Central.”

She said the show addressed issues that teenage girls face.

“That’s what’s special about our show,” Sabbaghi said. “Everything that we talk about is realistically happening at this age, from bullying to body image, to racism, questions that they have about boys, questions that they have about themselves, about stress, homework, summer jobs, how do I get along with my parents better, I want to do this but I need advice. It’s anything from advice for girls to realistic situations that are happening in the city or in the state and what are our opinions about them.”

“The priority of the show is to empower, encourage, and educate teen girls to make smart choices in a fun way,” she said. “Girls will learn the tools and skills to navigate one of the most confusing and challenging times of their lives.”

For more information on CityTV or any of its shows, visit citytv.org.